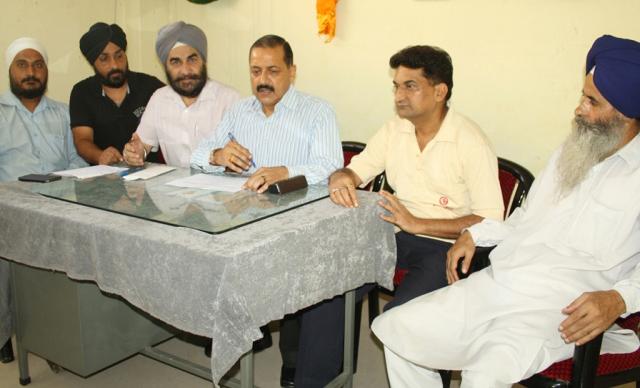 , September 08 (Scoop News) – Two successive meetings of prominent Sikh activists were held at BJP headquarters here under the chairmanship of BJP National Executive Member & State Chief Spokesperson  Dr. Jitendra Singh, who has also been assigned by the party to coordinate with Sikh community for the redressal of their community’s problems.

Dr. Jitendra Singh said that this was part of an initiative to reach out to the neglected sections of Sikh community in the state so that they feel physically as well as psychologically a part of the Jammu and Kashmir mainstream and do not feel alienated in any way. He said the Sikh community has traditionally been known for its uncompromising patriotism, nationalist commitment and uprightness. It is ironic that even when the country’s Prime Minister belong to Sikh community, repeated pleas from Sikh leaders and their organisations in J&K to the Prime Minister have failed to yield any results, he added.

Dr. Jitendra Singh informed that in the last six months, there have been a series of group meetings with Sikh members of different backgrounds which has helped identify certain major problems faced by the community in the state. He said, irrespective of political affiliations, the main issues of concern for the community include plight of Sikhs living in , particularly in Kashmir valley, the problems of Sikh refugees from PoK and other parts and security concerns of Sikh families living in the valley. He said the party plans to draw a long term roadmap for redressal of sikh communities issues and as a part of this effort, a Sikh sammelan is also planned in last week of this month.