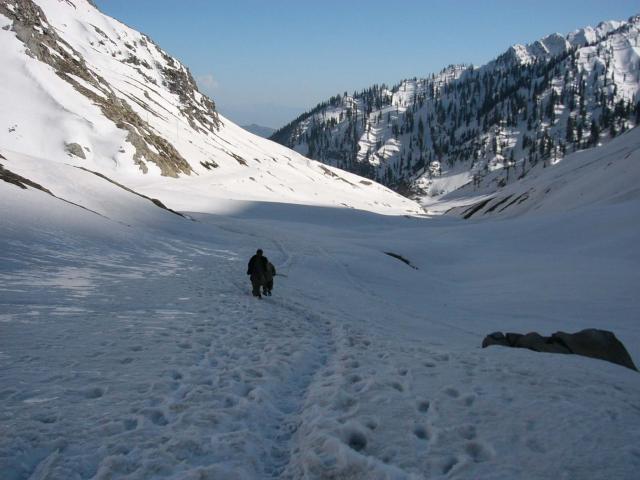 Record work of excavation of Lawari Rail Tunnel in the month of March, 2008.

CHITRAL: The ongoing work of excavation of Lawari Rail Tunnel is in progress. As the SAMBO (a Korean construction company) excavated some half kilometer long tunnel only in the month of March, 2008 as a result some 2200 meters tunnel were excavated at North portal (Chitral side). Hence more than five and half (5.5) kilometers tunnel have been completed from both sides ( Dir and Chitral) an official of National Highway Authority disclosed this scribe during visit of Lawari Rail tunnel.  “Excavation work of Lawari Rail Tunnel will be complete this year said Mr. Hermann Wilscher Project Manager (Consultant) an Austrian Tunnel Specialist (geo-consultant)”.  The Lawari Tunnel which is a matter of life and death for the people of Chitral was a long awaited demand of inhabitant of Chitral people.

Excavation work was started by the then Prime Minister of Pakistan Zulfiqar Ali Bhutto at his early regime and some 800 meters work was also done on the tunnel hence work was stopped by General  Ziaul Haq Chief Martial Law Administrator and President of Pakistan with a pretext of lack of fund. On the demand of these people time and again excavation work was once again started on the direction of President General retired Syed Parvez Musharaf after proper ground breaking ceremony in July 2005. Lawari pass is the only land route connecting Chitral to other sorts of the country but it remains block in winter season due to heavy snowfall. As a result Chitral remain disconnect at least for 4 to 5 months a year from other parts of the country. During blockage of Lawari top people of Chitral facing numerous problems they have only one alternate land route via Kunar Afghanistan which is not only uncomfortable but also risky.

Hence the NHA staff have assigned the contract of snow clearance to different contractors at Dir and Chitral side. Snow clearance works have been completed some 27 Kilometers from Dir side and 14 KM from Chitral side. The remaining 6 kilometers will be cleared within a week and it is expected that Lawari Pass will be opened for vehicular traffic until the end of this month or 1st April, 2008 Project Director Abdus Samad told. Although snow had removed upto 14 KM at Chitral side but the road was blocked due to debris of tunnel at the front of Lawari Rail tunnel at Ziarat. On the request of this writer Chairman NHA General Imtiaz Ahmad took immediate notice of the matter and directed concerned quarter to remove the debris from road immediately. As a result now vehicle can be travel for some 14 kilometers at Lawari pass and passengers who were facing to travel by feet now can be travel in a vehicle.  Social and Political circle of the area have demanded for early opening of Lawari pass for vehicular traffic. Because the people of Chitral are compelled to travel by feet over 10500 feet high peak of Lawari pass.

As so many people have lost their lives during traveling by feet in winter season over snow bound Lawari pass. Essential edible things especially bailers with a unique way that they pulling or drawing chickens in a wooden box over the snow covered way. Hence price of edible things remain high after closing of Lawari pass. But on the completion of Lawari Rail tunnel it will bring great revolution in the lives of Chitral people. As well as it will change their fate.
G.H. Farooqi PO Box NO. 50 GPO Chitral Pakistan phone # 0943-302295, 414418, 03025989602