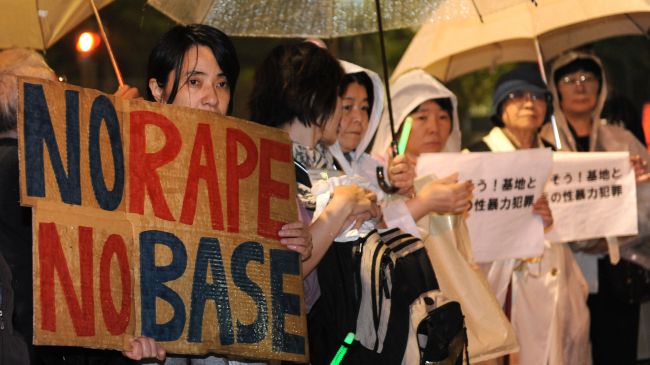 On January 4, 2014, Secretary of Defense Chuck Hagel called his counterpart in Japan Defense Minister Itsunori Onodera to thank him for allowing the necessary permitting for approval of a landfill request at Camp Schwab-Henoko Bay.

“This morning, Secretary of Defense Chuck Hagel called Japanese Defense Minister Itsunori Onodera to express appreciation for the Government of Japan’s efforts in securing approval of the landfill permit request to build the Futenma Replacement Facility at Camp Schwab-Henoko Bay, which is a critical part of the realignment of U.S. forces on Okinawa.

“He also noted the importance of the recent agreement by the United States and Japan to negotiate a framework to supplement the Status of Forces Agreement on environmental matters.

“Secretary Hagel and Minister Onodera discussed the implementation of several Alliance initiatives announced in the Oct. 3, 2013, 2+2 statement, including the deployment of a second TPY-2 missile defense radar to Japan and the launch of a forward-looking revision of the U.S.-Japan Defense Guidelines, where the two agreed on the importance of a transparent process.

“Secretary Hagel underscored the importance of Japan taking steps to improve relations with its neighbors, and to promote cooperation in advancing the shared goals of regional peace and stability. Secretary Hagel said he looked forward to continued bilateral discussions on strengthening the Alliance to meet the security challenges of the 21st century” (source: DOD press release http://www.defense.gov/releases/release.aspx?releaseid=16461).

In 2012 it was reported that the Japanese discovered the U.S Military dumped huge caches of toxic Agent Orange which it buried in a field at Futenma, Japan – potentially poisoning the Island. The situation caused outrage among the Japanese people, already upset over the rape of a child by U.S. Servicemen (see report: U.S. Military dumped deadly Agent Orange in Japan http://www.examiner.com/article/huge-caches-of-toxic-herbicide-agent-orange-buried-on-futenma-japan).

A fact the Secretary conveniently  left out of his press release for obvious reasons.

The U.S. Military is disliked very much by the Japanese people, especially following the 1995 abduction and rape of a 12-year-old Okinawan schoolgirl by two drunk depraved U.S. marines (and one U.S. sailor) led to demands for the removal of “all U.S. military bases in Japan.”

In February 2008, a 38-year-old U.S. Marine based on Okinawa was arrested in connection with the reported rape of a 14-year-old Okinawan girl. This triggered waves of protest by tens of thousands of Japanese against American military presence in Okinawa and led to tightened restrictions on off-base activities by all U.S. military personnel – in a effort to help protect the Japanese people from such incidents.

Unfortunetly, this wasn’t enough. In 2013, 2 U.S. Military Personnel Seaman Christopher Browning, of Athens, Texas, and Petty Officer 3rd Class Skyler Dozierwalker, of Muskogee, Oklahoma, were found guilty by the Naha District Court of the brutal rape and robbing of a young Japanese woman in her 20s in a parking lot in October. In what was a senseless crime.

Both sailors admitted committing the crime in court.

The case outraged many Okinawans, already sickened by the rape of the 12 year old by U.S, Marines in 2008. Okinawan hosts thousands of U.S. troops.

It also sparked tougher restrictions for all 50,000 U.S. military personnel in Japan, including a curfew and drinking restrictions (source: http://www.usatoday.com/story/news/nation/2013/03/01/us-navy-sailors-okinawa-rape/1955873/