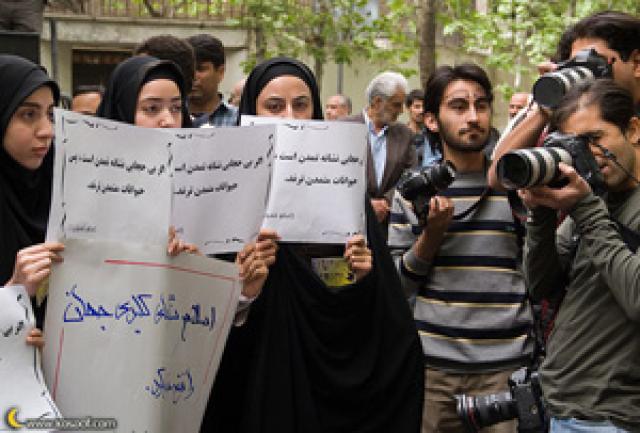 published several photos from this demonstration. One of the slogans in the photo above means “If carrying no veil means civilization, then animals are the most civilized.”

Kosoof, a leading Iranian photoblogger, has

“Do you know what I am thinking? When and where did all these these Fitnas start? A few years ago these anti-Islamic films began to be produced. Before the Islamic Revolution, nobody paid attention to Islam and its saints… After the Islamic Revolution other revolutions took off… Then they did not know what to do, and they started doing childish things to hurt Islam’s image in the world.”

The blogger adds that several films such as Not without My Daughter and 300 should be countered with films by Muslims.

“Christ, I am a Muslim who likes you. Don’t be sad about insults to your brother Muhammad, the Prophet. We all know these people are not your followers. They are not the ones who carry the cross, but launch crusades and kill people.”

The blogger questions whether the growing number of cinematic attacks on Muslims are coordinated.

Pangare writes to Jesus [Fa]: “Help us to resist these insults… I know you support us and you can read my heart.”

In addition to these Islamists, several other bloggers have shared their feelings and ideas on the film.

Arsham Parsi, a leading activist for homosexual rights in Iran, says [Fa]: “There are rational ways to express an opinion on something or challenge ideas. I watched this film, and I protest against it too.”

“I watched it and I found it ridiculous. How many Muslims are extremists? I think Muslims should first produce films to counter Fitna’s impact, and then try to think what makes people see us like this. Filtering and threatening just strengthens the film. Instead of jihads to kill people, our religious leaders should make jihads to make known to others the good side of Islam.”