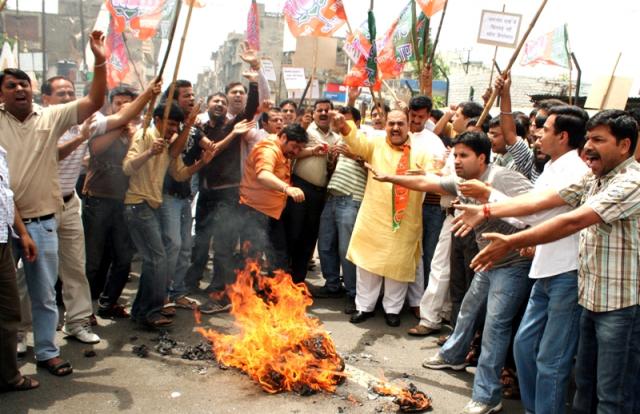 Jammu,May 17 (Scoop News) – State president of Bharatiya Janata Yuva Morcha (BJYM), Munish Sharma said that during the past few years,repeated attempts have been made to disturb the centuries old annual holy yatra of Baba Amarnath on one pretext or the other.He said that charging of rupees 25,000 from each langer party reminds of “Jazia” being imposed during the pre-independece periods.

Munish Sharma was addressing the activists of Bharatiya Janata Yuva Morcha outside the Raj Bhawan in on Monday. He said such a decision of the NC-Congress coalition is totally discriminatory and aimed at hurting the religious sentiments of the Hindus across the world.He said it is unfortunate that the successive governments in the state, including the present one, have always worked towards taking care of the religious sentiments of Muslims and discriminated on religious matters relating to Hindus in particular.

The government has created all facilities for smooth pilgrimage of Hajjis, including operation of direct flights from to and subsidy for Haj yatris. We do not oppose these facilities to our Muslim brethren but at the same time, ask the government not to create hurdles in smooth yatras of Hindus in different part of the state, the BJYM leader said.

If the government is sincere to ensure greater flow of tourists, including pilgrims, it should ensure that such facilities are created so that people coming from outside the state feel satisfied with the arrangements made by the authority, he said.

The BJYM leader also criticized the Congress leaders in particular for not uttering a single word against such a discriminatory decision and declared that the morcha will further intensify agitation in case this anti-Hindu decision is not withdrawn.

Earlier Hundreds of activists of Bharatiya Janata Yuva Morcha (BJYM), under the leadership of their State president Munish Sharma, held a protest demonstration outside the Raj Bhawan against imposition of rupees 25,000 as non-refundable security deposit on the religious and social organizations willing to organize langers during the 2-month annual Shri Amarnath Yatra.

The morcha activists who were carrying party flags and placards with slogans against this decision of the State government and burnt the effigy of the state government.