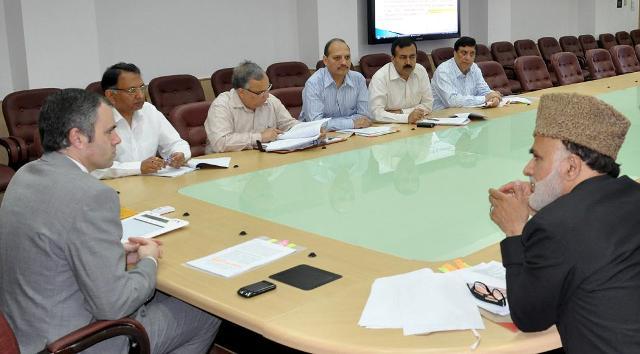 Jammu, April 1 (Scoop News) –   Making intensions of Government clear about empowering Panchayats in the State, Chief Minister, Omar Abdullah Friday directed for finalizing a road map for transfer of functions, functionaries and finances (3Fs) to Panchayats right from the day these are constituted.

“There should be no ambiguity about the empowerment of Panchayats”, he said and reiterated his Government’s resolve to empower the people at grass roots through an effective and transparent Panchayat Raj system.

The Chief Minister constituted a high power Committee under the Chief Secretary for formulating a road map of transfer of vital functions, functionaries and finances to Panchayats in a fixed timeframe so that Panchayats when established do not face any problem on this count.

Omar Abdullah was chairing a high level meeting to discuss the issues pertaining to Panchayat Raj (PR) and empowerment of Panchayats under PR Act.

The Chief Minister emphasized the need for clearing all decks regarding devolution of powers to Panchayats before the completion of election process so that there will be no delay in this stupendous task. He laid stress for timeline completion of the road map by the Committee constituted for the purpose.

Speaking in the meeting Minister for Panchayat Raj, Law and Justice, Ali Mohammad Sagar underscored the importance of Panchayats to bring in more transparency and efficiency in the implementation of development works. He said Panchayats are an effective tool to involve public representatives at grass roots in policy planning and implementation of area specific development schemes.

“The Panchayat Raj system would revolutionize the development activities and bring these under the ambit of public monitoring and scanning”, he said adding that this would reduce the chances of corruptions and malpractices.

The Chief Secretary, flagged the necessity of imparting training to the Panchayat functionaries adding that the services of NGOs in the field could be utilized besides IMPA for the purpose.

The Commissioner Secretary Rural Development in a PowerPoint presentation briefed the meeting about various aspects of Panchayat Raj Act and measures afoot to empower Panchayats under the Act.