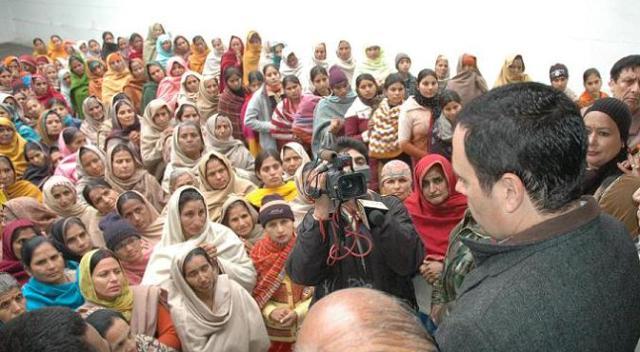 , January 05 (Vijay Kumar)  -“My Government is committed to facilitate dialogue between the Centre and those who shun violence and are prepared to discuss issues on table”, J&K Chief Minister Omar Abdullah asserted.

Addressing a gathering who assembled at his Jammu residence today to greet him on completion of one year in office with remarkable achievements, Chief Minister Omar Abdulla said that the reduction in militancy related incidents, lowest ever human rights violations, and resumption of internal dialogue between the Centre and the separatists marked his Government’s firm endeavour to restore peace and carry forward development in the State. “We have brought the Police on the forefront to deal with law and order situation putting security forces on the second line”, he said, adding that the number of security forces has been reduced in the past year.

Omar said that launch of historic Sheri-e-Kashmir Employment and Welfare Programme for Youth ( SKEWPY) was his Government’s  sincere step towards addressing the unemployment problem in the State. “A holistic approach has been adopted in the employment policy to provide a multi-pronged strategy for educated skilled and unskilled youth so that they earn their livelihood in a dignified manner”, he said.

“While ample opportunities for Government jobs will be available under the new policy, greater avenues have also been created for self-employment and skill development for young persons”, he said adding that the further improvement and strengthening of the policy will take place soon it progresses.

Mr. Omar said that as a part of the government policy to make administration prompt and responsive, the Chief Minister’s grievance cell has been made successfully functional. “The cell receives complaints all across the State which are being diarized, attended, responded and disposed off to the satisfaction of the people”, he said adding that he himself monitors the functioning of the grievance cell.

Mr. Abdullah said that his Government has flagged five basic sectors of road communication, water supply, power, health and education as focused areas and huge amounts have been earmarked for the development of these sectors to bring about a healthy change in the availability of basic amenities especially in rural areas. “All government functionaries from the Secretariat to the block levels have been sensitized to ensure expenditures judiciously and achieve targets in fixed time-frame.

“The State has been successful to get the highest ever plan allocation of Rs 6700 crores including Rs 1200 crore under PMRP this year”, he said maintaining that all development sectors have been provided handsome allocations to march ahead on path to development. The District Development Board meetings of all districts have been held and allocations distributed adequately.

“For the first time, State government was able to get additional Rs 1000 crores for Dal Development and Mughal road projects. This will give new impetus to speedy completion of the stupendous tasks of protection and preservation of Dal and opening of historic Mughal road for traffic”, he said.

He said his government’s one of the important achievements of the year is to get two Central Universities one each for and . This has not only helped to meet the aspiration of the people of both the divisions but helped to foil the attempts of those who wanted to create law and order situation on this issue.

Chief Minister said that he has drawn a blue print for the six year tenure of his government for integrated, comprehensive and equitable development. “We are committed to fulfill the promises made to people” during our tenure, he asserted.

Chief Minister said that reduction in security forces is not a political decision but is directly related to the security situation. “Less the challenges on account of security situation lesser will be the need for forces to deal with it”, he said adding that sooner the peace prevails, than the number of men in uniform reduces drastically.

Mr. Abdullah said that the justice Sageers recommendations on Centre-State relation have endorsed the National Conference view point regarding Autonomy. “ As the Chief             Minister of Jammu and Kashmir I have asked the Prime Minister, Dr Manmohan Singh to initiate dialogue on the recommendations of Justice Sageers so that a comprehensive strategy is unanimously evolved”, he said.

Chief Minister said that he wants to strengthen the institution of Information Commissioner provided under the Right to Information Act, to improve governance and make functioning of the administration transparent. “This will also help to reduce the chances of corruption”, he said adding that most suitable person, Mr. Wajhat Habibullah has been selected for the post of Information Commissioner. He expressed hope that Centre government will relive him with in next two months to take over the position here.