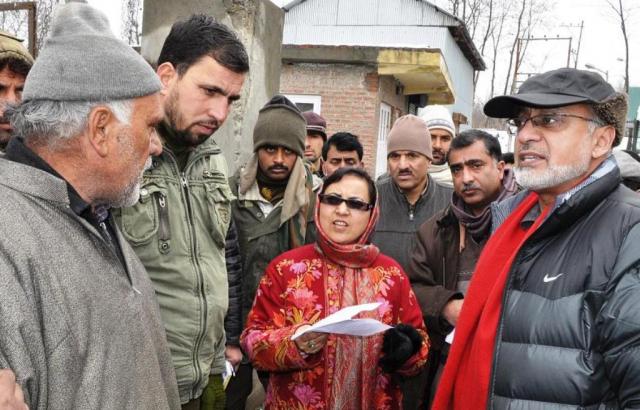 The Minister also inspected ongoing seven kilometre circular road project which is coming up at Rs. 19.23 crore. She was informed that so far Rs. 5.59 crore has been expended on the project.

Ms. Itoo inspected under construction Orphanage building in Putli Bagh, Samboora and Waakhpora Water Supply Scheme which is coming up at Rs. 1.79 crore, out of which Rs. 94 lakhs have been expended  on the scheme so far.

The Minister also took stock of health facilities being provided to patients in Sub-District Hospital Pulwama. She also inspected receiving Station Pulwama and enquired about the restoration of power supply in the district.

Ms. Sakina convened a meeting of district officers and appreciated the efforts made by the district administration for combating post snowfall situation in the district.

Later, the Minister inspected District Hospital Shopian and reviewed the health facilities provided to patients including availability of medicines and heating system in the hospital. She interacted with patients and urged the hospital authorities to work with dedication and missionary zeal to alleviate the sufferings of patients.

The Minister exhorted upon the officers to work in close coordination and provide succour to masses in view of recent heavy snowfall.