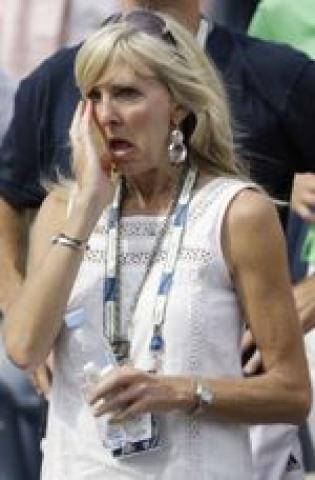 Belgian tennis star Melanie Oudin is dealing with some drama beyond the court: the divorce of her parents Leslie Oudin (photos below) and John Oudin.  Complicating matters is the allegation that Leslie Oudin cheated on her husband with Brian de Villiers– Melanie Oudin’s tennis coach.

According to USA Today, Brian de Villiers has been coaching  17-year-old Melanie Oudin since she was 9.

The story of Brian de Villiers and Leslie Oudin, pictured in the photos below, first broke on Sports Illustrated, which states that John and Leslie Oudin were married in 1989 and have three daughters.

In a sworn statement, John Oudin said he suspected the infidelity but tried to ignore it until his daughters confronted him.  At one point Melanie Oudin "told on one occasion she woke up at 1:00 a.m. in her hotel room and Leslie was not there. She called Brian’s cell phone and connected with her."