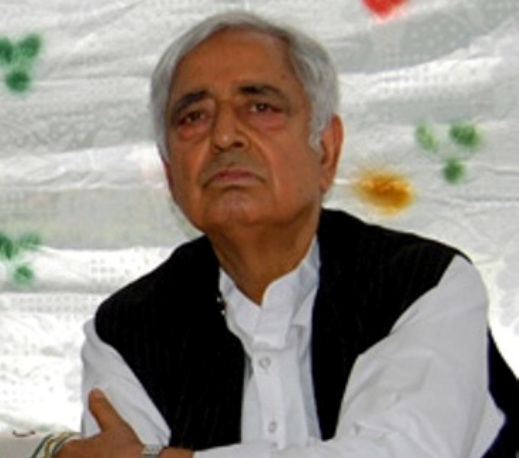 Jammu, November 02, (Scoop News)- Exhorting people use ballot as a mean to change their destiny, patron of the Peoples Democratic Party (PDP) Mufti Mohammad Sayeed today said that with just 16 MLAs his party had scripted a new chapter in the history of Jammu and Kashmir.
Addressing a meeting of prominent citizens of Sidhra and Bhatindhi, organized by Ch Talib, Mufti said that present NC-Congress coalition regime headed by Omar Abdullah has failed to connect itself with the people of the State. He highlighted achievements of the previous PDP-Congress regime and regretted that the present dispensation has failed carry forward the agenda of peace and development which was aggressively pursued by its predecessor.
“I don’t want to praise myself but everything is visible on the ground”, he said while highlighting achievements of his government.
“What to say to further accelerating our
agenda of development in the State, the present regime has even failed to complete the works started by previous PDP-Congress regime”. Mufti said and added that besides acceleratingdevelopmental activities, the previous PDP led government had restored dignity and honour of the people of Jammu and Kashmir.
He further added that wrong policies being pursued by the NC-Congress have been fueling alienation and creating desperation among youth of the state.
Mufti citizens to support party candidate for Gandhi Nagar assembly segment, Amrik Singh Reen.
Former MLC and senior leader Ved Mahajan, Nizamudin Khatana, MLA Ch Zulfikar, Rashid Malik, Amrik Singh Reen, Akram, Zaffar Khan, Showkat Gujjar, Razzak Malik, Yakoob and others also addressed the gathering.

Filed under: News, Politics
Share Tweet Pin G Plus Email
previous article: Iranian official’s plan to end ISIL is to “turn the entire Muslim world against it!”
next article: Mufti & Beigh assures empowerment of all regions, sub-regions of J&K