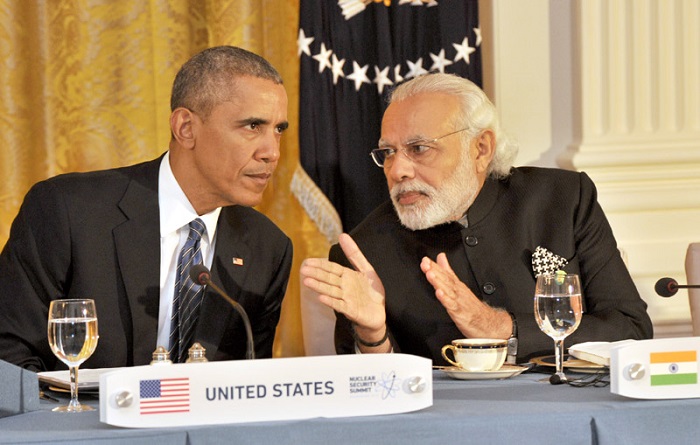 The Prime Minister, Mr. Narendra Modi at the dinner hosted by the President of United States of America (USA), Mr. Barack Obama, at the White House, in Washington D.C. on March 31, 2016.

Prime Minister At Dinner Hosted By US President

Washington DC (PIB-GR-TYP-BIN): The Prime Minister, Mr. Narendra Modi made an intervention during the dinner hosted by US President Barack Obama, on the theme of nuclear security threat perceptions on March 31.

Appreciating the US President for putting the spotlight on nuclear security, the Prime Minister said he had, by doing so, done great service to global security.

Referring to the recent terror attacks in Brussels, the Prime Minister said that Brussels shows us how real and immediate is the threat to nuclear security from terrorism. Mr. Narendra Modi called for focus on three contemporary features of terrorism: First, today’s terrorism uses extreme violence as theatre.

Second, we are no longer looking for a man in a cave, but we are hunting for a terrorist in a city with a computer or a smartphone. Third, state actors working with nuclear traffickers and terrorists present the greatest risk.

Noting that terror has evolved and terrorists are using 21st century technology, the Prime Minister observed that our responses are rooted in the past. He said terrorism is globally networked, but we still act only nationally to counter this threat. He added that the reach and supply chains of terrorism are global, but genuine cooperation between nation states is not.

The Prime Minister said that without prevention and prosecution of acts of terrorism, there is no deterrence against nuclear terrorism. He urged everyone to drop the notion that terrorism is someone else’s problem and that “his” terrorist is not “my” terrorist.

The Prime Minister said nuclear security must remain an abiding national priority, and all States must completely abide by their international obligations.