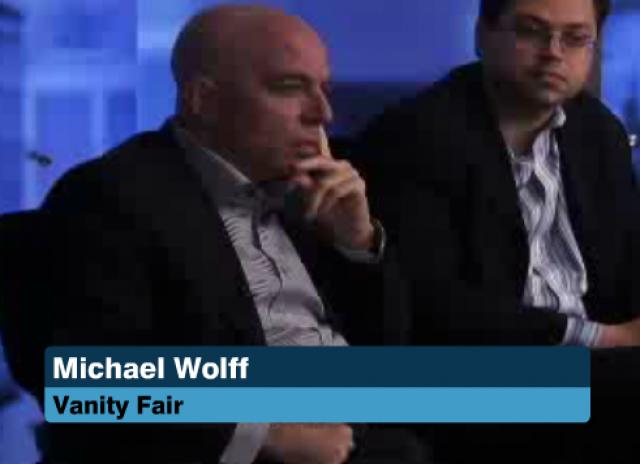 At a panel discussion yesterday on the ‘Future of Media,’ Vanity Fair columnist Michael Wolff repeatedly assailed the viability of the New York Times, saying that its content was no longer compelling and its supposed traffic success inflated.

The markedly male panel gathered some of the highest profile journalists from old media, including David Carr of NY Times, Keith Kelly of NY Post, Kenneth Li of Reuters, and Johnnie Roberts of Newsweek countered by lone new media wolf Erick Schonfeld from the blog TechCrunch.

Rather than imagining a glorious future, the conversation was most effective in revealing old media’s anxiety in the face of a changing industry model.

The most contentious exchanges were between provocateur Michael Wolff and media columnist David Carr. Carr rejected the idea that a ‘four-person’ team like that of TechCrunch could produce valuable content, saying that, “if you want to know what’s going on in the greenzone, four people aren’t going to work.”

At this, Michael Wolff began a denouncement that would last throughout the hour, asserting that the “New York Times is in a large part getting its news off the internet.”
(See statement in video at 19:20)

Wolff later said, “the truth is, that out there is the perception that you’re not really offering all that much value.  It doesn’t make any difference if you believe you are.” David Carr retorted that the claim was “a bunch of shit” and pointed to “really great metrics in…the growth of our online audience.”

On cue, Michael Wolff eviscerated the NY Times reporter’s claim, saying, “I can tell you the metrics of your online audience. Your online audience grows because you bought a site called About.com, one of the lowest rent, completely unverifiable collections of information online.”

At that point the amicable Johnnie Roberts of Newsweek mercifully intervened on Carr’s behalf. Wolff later told Roberts that “if Newsweek is still around in a few years, I’ll buy you dinner.”

A rare moment of clarity came from Keith Kelly of the NY Post, who reminded his peers that despite their “high and mighty and noble” misconceptions, newspapers were created to sell ads, not serve the public.  In true Murdochian style he urged everyone to remember that print “was an ad-driven vehicle at its inception…it was a vehicle for commerce.”

Carr later showed surprising tech savvy, dwarfing that of Wolff or Erick Schonfeld, who both unabashedly plugged their online startups.

“News is the killer app on the web,” said David Carr.