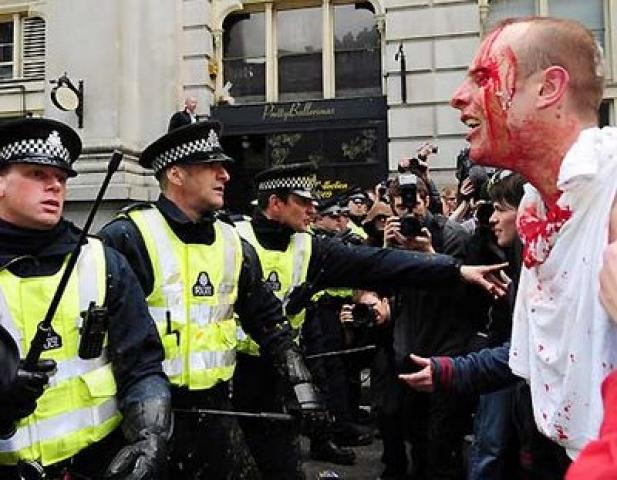 The London riots bring to mind the song "Dancing in the Street" by Martha and the Vandellas, the masterful Motown group. The song is a utopian vision of a world filled with dancers:

Callin’ out around the world, are you ready for a brand new beat?

Summer’s here and the time is right for dancin’ in the street.

It was sung by The Grateful Dead, famously, and by many other white people. "Dancing in the Street" probably would have gone to number 1 — it peaked at number 2 — but was pulled from the radio because the authorities feared it incited rioting. (The song was released in 1964 during a summer of riots.) (How exactly did this work? Would the police chief of Cleveland call up the rock ‘n roll station and say, "You know what those people are like… they hear a song like that, they go wild"?) Anyway, this anecdote points up the connection between rioting and dancing. Certainly, a street riot is a form of dance. Smashing the window of a clothing store is a body-performance. Public street battles satisfy a human need — particularly among the young — for violent dance.

And like "Dancing in the Street," riots have a utopian yearning (e.g., the desire for a world where CD players are free):

All we need is music, sweet music,

We have been taught that dance is essentially pacifist, like the other arts. If, when you stood in front of the Mona Lisa, a gun from behind her right eye shot you in the arm, you would no longer consider the painting a work of art. It would now be "a weapon." But is that distinction valid?

Generally, riots are occasioned by poverty. One reason the upper middle class never riots, no matter how angry they get — say, if someone cancels their golf appointment — is because they already have enough stuff. (In fact, they have too much stuff.) They don’t rush into an electronics store and grab a TV set — which is illegal, and possibly dangerous — because they already have a TV set. Riots display the courage — foolish courage — of the very poor.