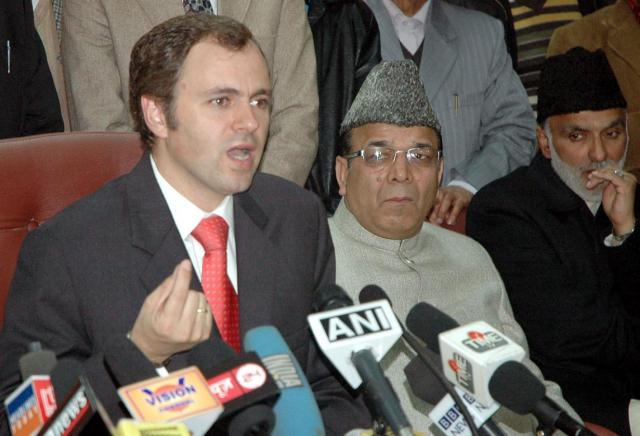 The detenues, against whom there are no serious charges would be considered for release and a Committee constituted for the purpose would review the cases and consider release of prisoners, said Chief Minister CM), Omar Abdullah while joining the office, in Jammu today.

Government is committed to work for equitable development of all the three regions of the State and making administration more transparent and accountable to serve the people better, he added. Expressing his gratitude to the people for coming out to vote in large numbers in the Assembly elections, the Chief Minister said that it has thrown up a big challenge before the new Government to deliver and come up to their expectations.

Addressing a crowded press conference immediately after his arrival at the Civil Secretariat for the first time here today after taking over as the Chief Minister, Mr. Abdullah congratulated the Election Commission of India, Governor, Mr. N. N. Vohra and the State administration for the smoothly-held polls. He said conduct of elections with huge participation of people is the single largest success story.

In reply to a question on Indo-Pak relations, Mr. Abdullah, advising caution, said that war is not a solution to any problem and tension between the two countries will benefit none. The Chief Minister, however, added is not an enemy, but some forces within that country were inimical to good relations with . Referring to the Prime Minister’s statement, he said that the Prime Minister has also said that one can change his friends but not neighbours, adding that the harmonious relations between the two countries were in the interest of everyone.

On the issue of transparency, the Chief Minister said that the Right to Information Act in the State would be brought at par with the Central Act and the State Accountability Commission and the Vigilance Organization will be provided more teeth.

Stating that he did not believe in sloganeering, the Chief Minister said his actions and not words will speak. "The focus of my Government would be to deliver on all fronts and it should be judged on the basis of performance", Mr. Abdullah said.

Mr. Abdullah said that the bureaucracy in the State was capable and experienced and everyone will be judged on merit and performance. "I have not come with a baggage. The bureaucracy has to keep itself away from politics. They know their job well and we know our job. It is a new beginning and we will work together to serve the people better", said the Chief Minister.

Replying to a question, the Chief Minister said that there has been smooth transition of power in the State and it took only one week to put the coalition Government in place despite the fact that National Conference and Congress had no pre-poll alliance. He said nobody expects Congress or National Conference to surrender their political ideology, adding "we will work together for the welfare of the people and the State".

On the issue of implementation of the recommendations of the Sixth Pay Commission, the Chief Minister said that it was under the active consideration of the Government and the modalities and financial implications will be worked out in consultation with the Finance Minister and concerned officials, when the portfolios are allocated. He, however, said that in principle, there was no problem as far as implementing the Sixth Pay Commission is concerned. ‘We are positive about it", he added.

On being asked if he would proceed against ex-ministers of now opposition party, Mr. Abdullah said, "I do not believe in politics of vindictiveness and revenge and do not intend to set up any commission". He added that under the Right to Information Act, people would have access to information.

Describing the coalition Government as a Government of Unity, the Chief Minister said that through careful governance, the State would be put on rails in all spheres of development. He said that this is a Government of the parties which have stakes in all the three regions.  He said that both NC as well as Congress are equally concerned about Kashmir, and Ladakh and neither of the two parties can afford to play one region against the other.

On allegations of regional discrimination, he said that his Government would like to find out the truth behind these allegations and ensure that all areas get justice so that the aspirations of the people are addressed.

The Chief Minister said that as far as tourism is concerned, the people have sent a strong message by voting massively in the elections. He hoped that secure environs will ensure tourism revival and tourists, both domestic and foreign, will start coming to the State in large numbers.

On the question of tackling unemployment, the Chief Minister said that there are vacancies in various Government departments which the Government plans to fill up. He, however, said that Government jobs are no solution to the problem. "Perception about employment in J&K needs to be changed. Unfortunately, in J&K, employment only means when one is employed in the Government sector. This mindset has to change and a balance struck. I would like a situation where private sector is first priority for a job", said the Chief Minister.  He said that there is need to enhance the employability among jobless by going in for skill development of our youth. He said the Prime Minister, Dr. Manmohan Singh, UPA Chairperson, Mrs. Sonia Gandhi and the General Secretary of AICC, Mr. Rahul Gandhi, in particular, are focusing on skill development of the youth in the country, adding that we have to put in place infrastructure in for skill development.

On the issue of talks with the separatists, the Chief Minister said his Government would like to create conditions conducive for a dialogue between them and the Centre.

In reply to another question about strong opposition, the Chief Minister said his Government is looking for a vibrant opposition and equally vibrant media, as it keeps the Government on the right track. He also sought constructive cooperation from the media.

When asked to comment about Israeli pounding on civilians in , the Chief Minister said that violence is no solution to any problem.