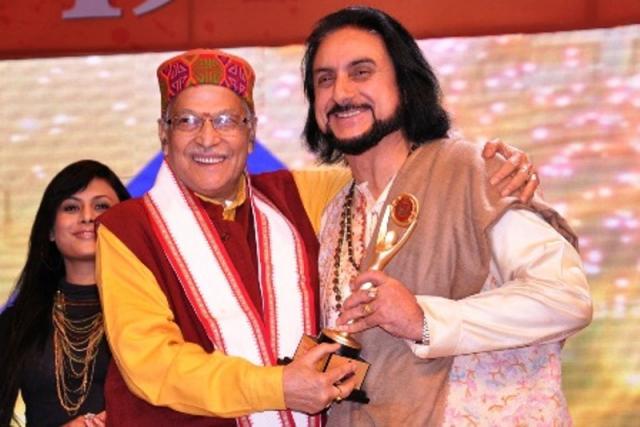 New Delhi/Jammu, December 31 (Scoop News) –Music legend Pandit Bhajan Sopori has been honoured with the prestigious Sur Aradhana Sangeet Ratan Award 2012 for his contribution to the field of music as a Legendary Santoor Maestro & Music Composer on the occasion of 19th Sur Aradhana Awards. Other awardees include Actor Dheeraj Kumar and Anupam Kher, Composer Bappi Lehri, Violinist L Subramaniam, singer Kavita Krishnamurti and others. The awards were presented by the Senior BJP Leader Murli Manohar Joshi. The function was organized at Srifort Auditorium, in the presence of over 2000 music spectators including prominent personalities from the field of art & cinema. The award ceremony featured performances by various Bollywood singers. Pt. Sopori thanked R.S. Sharma, the organizer of the event, for the successful function. He thanked the organizing team for felicitating him with the Sangeet Ratan Award.

Pt. Sopori hailed as the “Saint of the Santoor” and the “King of Strings, and regarded as the cultural bridge of the State of Jammu & Kashmir and the rest of the country.  A composer of more than 5000 songs, he has led the revival of Sufism to spread the message of humanism amongst the masses especially the youth. He has used his Santoor and his compositions to highlight the concept of oneness and foster unity enshrining the idea of national integration, humanism and peace amongst the common man and the youth in particular for which he has been honoured with numerous national and international awards and decorations.