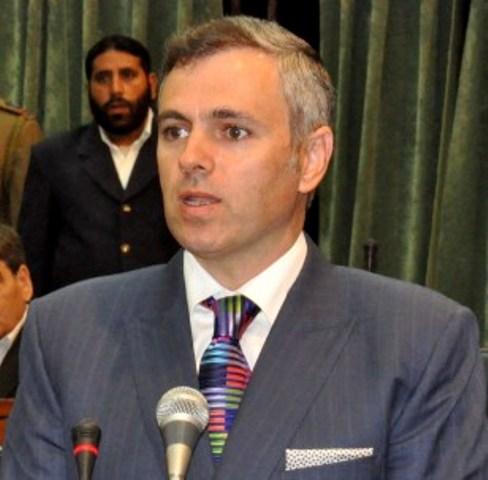 Kishtwar(Jammu), April 18 (Scoop News) –In his master stroke against Peoples Democratic Party (PDP) propaganda on water resources, Chief Minister Omar Abdullah Thursday said that crying hoarse now, PDP lost voice on power policy in its tenure. He questioned the locus-standi of the party on this issue and added that during PDP government not even a one-mega watt capacity power project was launched in the State.

“Crying hoarse is something else and taking action when in power is something different”, he said and added that irrespective of any political mileage his government has created history by launching dozens of mega, small and micro projects through the State Power Development Corporation, in PPP mode, as joint ventures and in IPP pattern.

Addressing a huge public gathering at Kishtwar today, Omar Abdullah said that injustice has been meted out to the State by granting rights on the waters of J&K Rivers to Pakistan without consulting Jammu and Kashmir and without providing for compensation for this action taken during the time when Sheikh Sahib was in prison.

“We are strongly and vehemently advocating return of Uri, Salal and Dulhasti Power Projects back to the State by NHPC to compensate the losses we are regularly bearing due to the Indus Water Treaty”, he said and added that NHPC is putting hurdles in our efforts but “let me tell them categorically that we will not give any project to NHPC in future to be executed by it individually unless it agrees to give back the projects we have asked for”. He said NHPC has taken full advantage of these projects and it is now their duty to return these projects for the economic betterment of the State without further delay.

The Chief Minister said that Rangarajan Committee, Working Group constituted by Prime Minister and Interlocutors have recommended the return of power projects back to the State by the NHPC adding that he would continue to work tirelessly to make it happen.

“I am hopeful that Prime Minister Dr. Manmohan Singh and UPA Chairperson Sonia Gandhi, who are friends of the State and keen to see all round development here, will use their offices to make NHPC to return the power projects to the State as early as possible”, he added and highlighted the potential of State to produce substantial quantity of hydro electricity and provide strong edifice to its economy. He said the economic prosperity of J&K lies in the harnessing of hydro energy and utilizing it for industrial, agricultural and other purposes besides selling the surplus.

The Chief Minister referred to the launch of four most important hydro electric projects of Retle, Packaldul, Kawar and Kiru sanctioned by his government in Chenab Valley and said that the generation of indigenous power from these projects would catapult the power scenario in the State.

Omar Abdullah said that financial health of the State could only be improved by utilizing the State’s water resources in full. He said his government is keenly working on this policy without any political consideration as is clear by the fact that the completion of these projects would go beyond 2014 Assembly Elections.

The public meeting was also addressed by Minister of State for Home, Sajjad Ahmad Kitchloo and Provincial President National Conference, Jammu, Devender Singh Rana. Many former legislators and local leaders were present on the occasion.