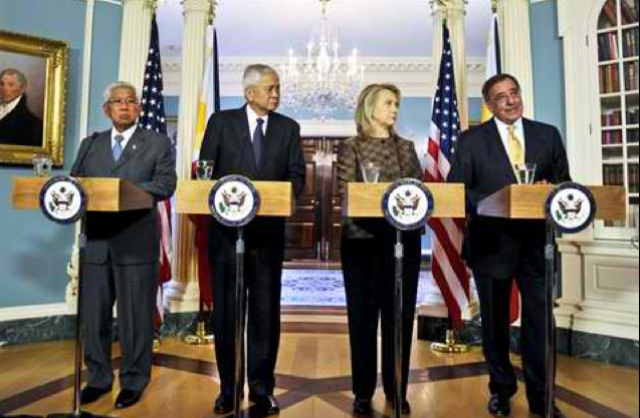 Washington DC:  Just concluded talks on april 30th in the US capitol, between the USA and the Philippines in Washington DC stressed the "Deepening security and Strategic Partnership" a briefing document on the joint 2 + 2 talks. The first conducted jointly between the US Departments of Defence and State with the Philippine Foreign Affiars and Defense counterparts.

In the briefing documents, the US State Department stressed, the deeping relationship security relationship between the two coutnries who. "Continue to enhance our cooperation and force interoperability in the areas of humanitarian assistance, disaster relief, and maritime security, conducting nearly 20 combined exercises every year,"

The talks come as the Philippines, is in a heated dispute with China. Highlighted by confrontations at sea between Naval vessels and Coast Guard ships over rich fishing gorunds just off the shore of the Philippines. The territory of the Philippines is well known to the US government as the islands were once part of the USA as the commonwealth of the Philippines Islands until independance in 1946.

Which China claims as reports of rich oil and natural gas deposits continue to be found in the area. The State Department document sited the increased ties including numberous direct US-Philippine training efforts in law enforcement and defense cooperation.

"There were over 100 U.S. ship visits to the Philippines last year. In June 2012, the U.S. hospital ship the USNS Mercy will provide medical, dental, and veterinary services to Filipinos on the islands of Samar, Basilan, and Sulu. U.S. personnel also intend to partner with counterparts from the Philippine armed " the document said.

A founding member of ASEAN, the Philippines is the current ASEAN country coordinator for the United States, and will host the U.S.-ASEAN Dialogue in Manila this May, along with the first meeting of the U.S.-ASEAN Eminent Persons Group.

The US DEA is owkring closely with the philippines PDEA to fight the incewased use of the airports and seaports as transhipment points to the US via the CNMI and Guam as well as the FSM by narcotics organztions in the south east asian region and China.

"The U.S. Drug Enforcement Administration and Philippine Drug Enforcement Agency this year increased their counternarcotics cooperation at the Ninoy Aquino International Airport resulting in several drug seizures, including 20 kilograms of methamphetamine, and the arrest of 11 drug couriers." the statement said further that since 2010 the US government has been actively supporting also the PNP SBS or special boat squadron based in Puerto Princesa Palawan to deal with illegal fishing and poaching as well as increased counter narcotics smuggling in the areas off of Palawan island.

"The Philippine National Police established a Special Boat Unit" based in Puerto Princesa City is a model law enforcement and environment protection unit a state department spokesman said. "Operational since late 2010, efforts have yielded the arrest of 165 persons at sea, seizure of 12 vessels and substantial contraband."

This includes establishing facilities for Explosive Ordnance Disposal (EOD) training and a Forensics Laboratory used by police for post-blast investigations.

This summer, the U.S. and Philippine Governments jointly will host an APEC workshop on measures to combat bus terrorism.

OTHER KEY POINTS OF US STATE DEPARTMENT BRIEFING :

Deepening the Security and Strategic Partnership

We continue to enhance our cooperation and force interoperability in the areas of humanitarian assistance, disaster relief, and maritime security, conducting nearly 20 combined exercises every year, including the recently completed 28th iteration of Exercise “Balikatan” (“Shoulder-to-Shoulder”).

The Philippines actively participates in military training, education, and exchange opportunities in the United States. More than 500 Philippine military personnel completed programs through the U.S. military system in the last fiscal year. Philippine Military Academy (PMA) cadets have also been accepted into each of the major U.S. service academies.

The United States and the Philippines are engaged in a Partnership for Growth (PFG) launched by Secretaries Clinton and del Rosario in Manila last November.

We have commenced work on a number of PFG priorities aimed at enhancing the trade and investment environment, improving anti-corruption enforcement effectiveness, and helping streamline the administration of justice in the Philippines. Since launching the Millennium Challenge Corporation (MCC) Compact in 2010 for $434 million to reduce poverty through economic growth,

Filipino professionals, including educators and medical professionals, have through their competence and dedication, made significant contributions to U.S. society.

The annual “Memphis in May” international festival in Tennessee will salute the Philippines as this year’s featured country. The month-long exposé will include authentic Philippine cuisine, dance performances, and art exhibits.
The Fulbright program in the Philippines is the world’s oldest continuous program. Since its inception in 1948, Fulbright grants have been awarded to 1,700 Filipinos and 700 Americans for graduate degree study, teaching, and research in the Philippines and the United States. Another 70 Filipino professionals have gone to the United States on Humphrey fellowships.
More than 8,590 Peace Corps Volunteers have served in the Philippines since the program was established in 1961. Volunteers work in the areas of education, community development, and coastal resource management.