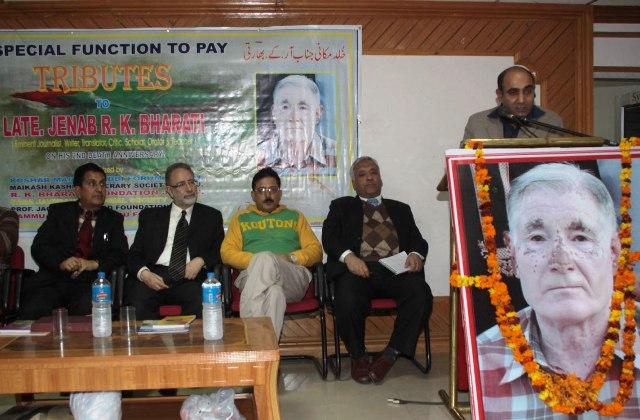 Dr Roop Lal Sharma, veteran educationist and the Chairman of Shri Sain Charitable Trust while paying tributes recalled the contribution of RK Bharati in journalism through his in-depth political analysis and humorous articles besides the satire of the political system of the state through one of his popular column Swami Bhayankaranand in The Shadow and other newspapers.
Prof Shohab Inayat Malik, HoD Department of Urdu, University of Jammu discussed at length the contribution of RK Bharti to Urdu literature and journalism earlier through writings and various forums and later in Jammu University where he taught Urdu Journalism.
He recalled his association with RK Bharati and his simple way of life that became a model for the students of journalism at Urdu Department in Jammu University.Amin Banjara, a veteran Urdu writer paid glowing tributes to RK Bharati and talked about the close relationship he shared with RK Bharati.
Banjara said that Bharati was like a family member who would often drop in and discuss various issues particularly literature with him.
He said that he still misses the presence of RK Bharati from the literary circles where his presence was enough to rejuvenate the literary discussions.

Aseer Kishtwari who convened the programme felt that the demise of RK Bharati has created a void in the literary circles which was difficult
to fill as finding a person of his stature and simplicity was almost difficult in these days.He assured the gathering that many more such functions would be
organized to discuss the literary contribution of RK Bharati towards the society.
Glowing tributes were also paid to the veteran writer by Jaswant Manhas, Bashir Bhaderwahi, Santosh Shah Nadaan, Shyam Talib and other dignitaries present on the occasion.