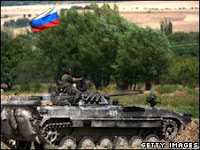 It is clear by all reports that Georgia initiated the attacks in the small town of South Ossetia against Russian troops. However, the Russians have claimed from the beginning that the Georgian military was targeting civilians and committing genocidal war crimes. Many believed, and even those in the Saakashvili government, that the U.S. and NATO countries would back up the incursion into contested territories, but the member nation of NATO, and even the U.S. only spewed harsh rhetoric against the Russian government.

U.S. heads of state only seemed to be saber rattling but with no real conviction or substance behind their words. The common phrase being put forward was “Russia must pull out of Georgia or else,” which in essence seems to be empty threats without the “Or else" being defined. Nevertheless, the Georgian government must be breathing a sigh of relief that Moscow has decided to stop its incursion into the Georgian lands. Most likely Georgia had considered that the U.S. as well as NATO would have come to her aid in the event of a Russian invasion. It was a very big gamble on the Georgian government’s part and it appears that it has not paid off.

It seems that no countries have the fortitude or inclination to get involved in a conflict with Russia as of yet and have only sought political means in which to stop the Russian onslaught. Russia on the other hand, has given a very determined portrayal of her response to any nation that may consider encroaching onto its territories whether they are contested or not. It is apparent that Russia will send everything they have at any nation in any event and this has most of the member nations of NATO frightened. So much so, that the membership of Georgia may be challenged by those that would appease Moscow. This would deal a very heavy blow to the pro U.S. nation and may open them up to further skirmishes with Russia.

It also begs the question, what is to stop Moscow from invading other former Soviet member states such as the Ukraine, and what would be the resolve of the world in stopping a new forced conglomeration of the old Soviet Union. This is something that Russian leaders must be considering. There are those in the Russian government that long for the glory days of the old Soviet Union and it is possible that Putin is one of those actively working on the possibility.