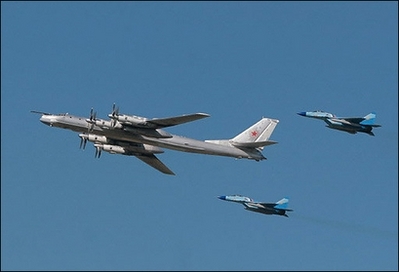 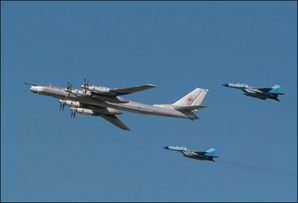 According to the entertainment based, corporate owned news service CBS:

“Major Beth Smith of North  American Aerospace Defense Command, said that the long range Russian bombers never officially entered the U.S. airspace when two NORAD fighter jets made visual contact with them. The incident occurred about five hours after Russian bombers and a refueling tanker were seen entering the so called  Air Defense Identification Zone (ADIZ), airspace that extends about 200 miles from the U.S. coast. The Russian aircraft left the ADIZ after being identified by two fighters from the Alaskan NORAD region, Smith said.”

I tried unsuccessfully to verify the information contained in the CBS report with Major Smith, but NORAD officials didn’t respond to our emails or telephone calls and were uncooperative in the process.

In the past CBS news has previously misrepresented  facts in their reporting on the news.

It should be noted that NORAD response was too little too late in this case and took, by their own admission 5 hours to scramble two fighter jets to intercept the bombers – which reached within 50 miles of the US coastline off California.

Which is totally inadequate to prevent a real attack!

To be clear, the TU-95 is not only a strategic long range bomber but a standoff (nuclear equipped) cruise missile carrier capable of carrying 6  KH-55 Granat (NATO designation: AS-15 KENT) missiles.

It can launch those cruise missiles from 1800 miles away and still strike their targets with pinpoint accuracy.

If you draw a map from various points along the northern coast of California where the Russian bombers were supposedly intercepted and extend that out it will encompass many major U.S. population centers and military bases.

Like I said had this been an actual attack and the 4 Russian bombers were successful in launching their 6 missiles at six different targets each, you had the potential for 24 different targets being destroyed by nuclear explosions (4 bombers x 6 cruise missiles = 24 targets) at least the size of the detonations at Hiroshima in Japan during WWII, only probably on a scale of 10 times more powerful!

The incident is a wake up call for us. In terms of a readiness exercise on the  part of the Russians it would have been a complete success.