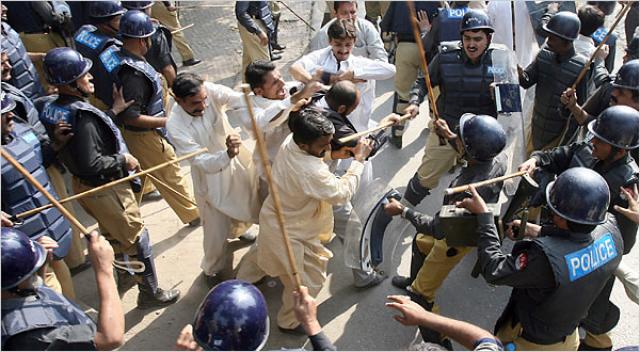 He is going to address a protest rally staged by the political activists and lawyers at GPO chowk Lahore.

There had been clashes between the Police and protestors on Mall road where the Police have used tear gas and baton charge to disperse them.

The convoy of Mian Nawaz Sharif is moving towards GPO chowk along with a large number of supporters.

Makhdoom Javed Hashmi, a parliamentarian and leader of PML (N) has been arrested when he came out after addressing the lawyers meeting at the Islamabad bar council.

A leader from the ruling group, Pakistan Peoples’ Party, Farid Toofan resigned from the party and announced to participate in the long march and sit-in at Islamabad but he has been arrested by the N.W.F P Police.

Thousands of marchers are moving towards Islamabad from different parts of Pakistan despite the blockade and obstacles installed by the Police, in shape of containers, buses and trucks.

The transport and communication system has been totally disturbed and even the people could not travel to other cities of Pakistan.

The government has also directed the different cellular companies in Islamabad to suspend the mobile text message service for two days.

The clashes started between the protestors and Police at Kalma chowk Lahore and the convoy of Mian Nawaz Sharif is likely to reach here and then en route for GPO chowk.

The indiscriminate shelling and baton charge on women and media people by the Police is severely criticized by the human rights activists and civil society.

The Punjab government has removed the security squad that was guarding the PML (N) chief Mian Nawaz Sharif.