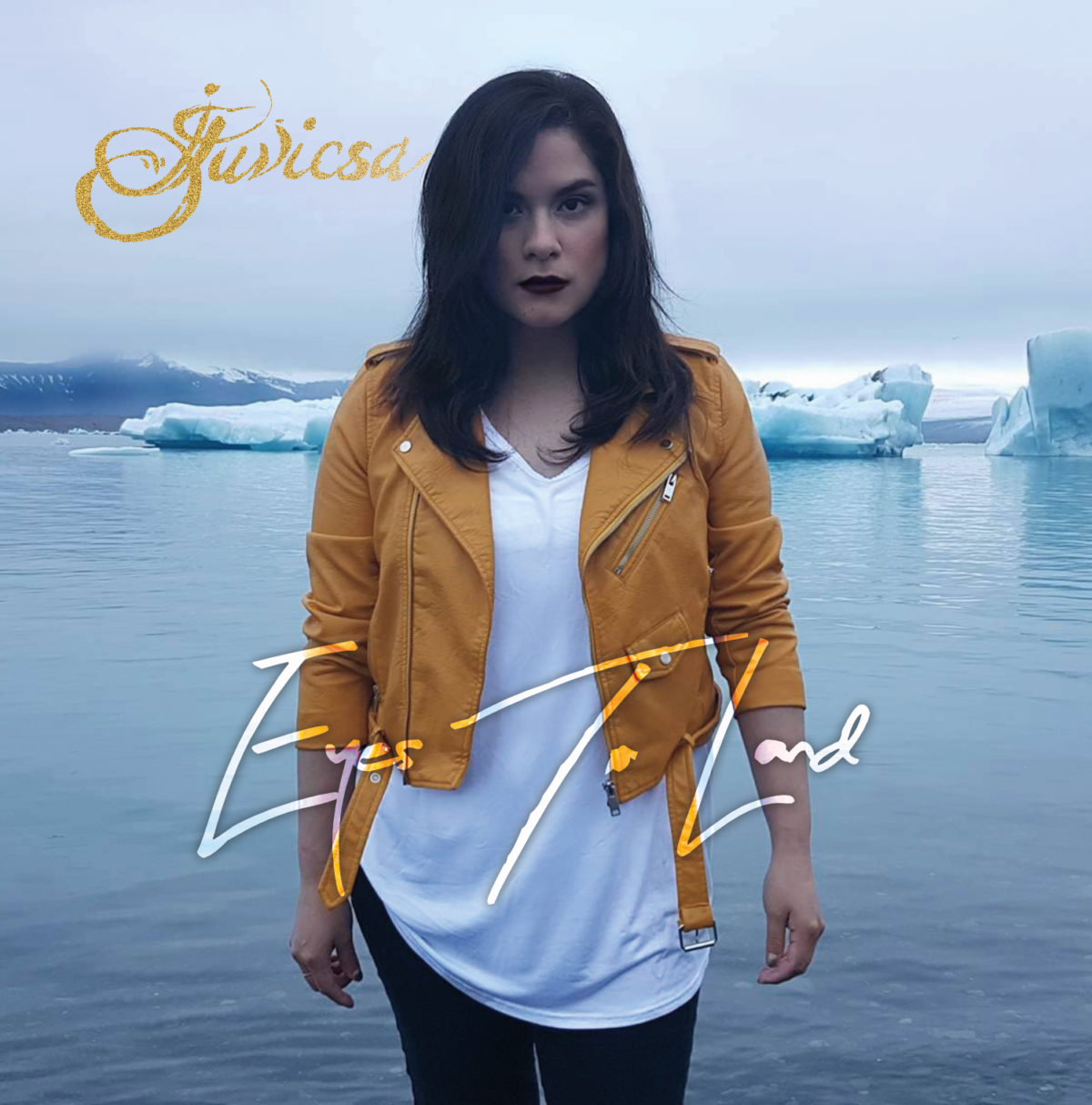 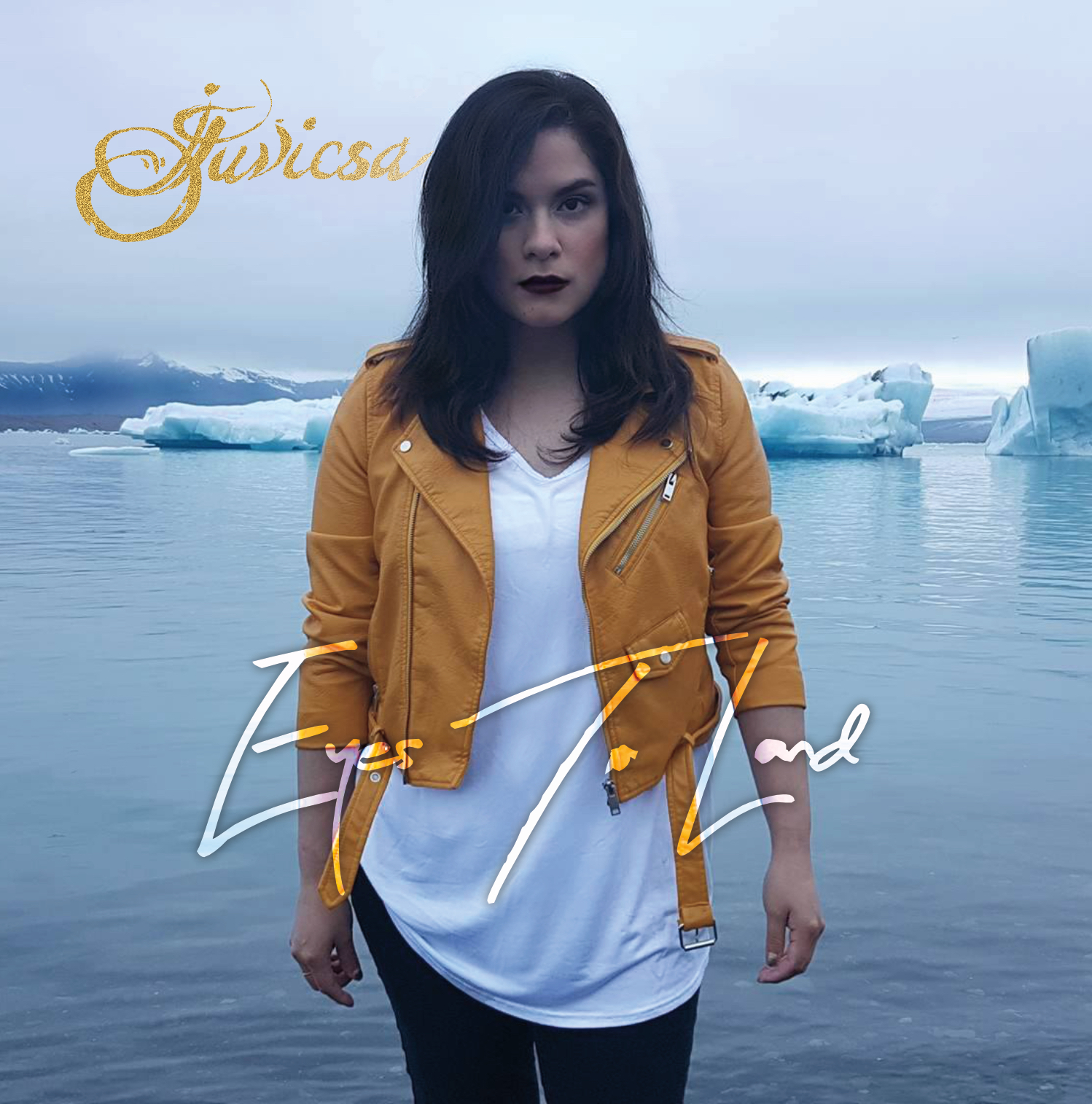 Juvicsa on the cover of her debut EP “Eyes to Land”

Peruvian-Swedish singer songwriter Juvicsa’s debut EP Eyes to Land takes listeners on a deeply poetic journey through the high intensity emotions that go hand in hand with heartbreak, but without a trace of self-pity, the powerful pop/rock EP exudes confidence, the strength to face one’s mistakes and the courage to move on.

From the breathy, seductive and anthemic qualities of “Waiting” to the soulful yearnings of “Unaware” and the sweet and sexy sounds of ”Slow,”  Eyes to Land perfectly showcases Juvicsa’s vocal range with a rare diversity that ensures the EP never gets old.

The opening song “Waiting” creates the feeling that you’re entering another world with the sustained sound of heavy bass synth letting us know that it’s one of intense emotion. As the kick drum comes in we feel the love, a semi-80s shoegaze kind of love, but the metal-inspired guitar riffs echoing in the background tell us this love story is far from a bed of roses.

Her voice tells the story of someone who is both regretful and accepting of their missteps in a relationship gone awry, yet invigorated by the new found power of knowing how and when to really let go. The rhythm of the song with pauses followed by the quickening pace of the melodies and Juvicsa’s vocals make the heart beat faster, while the strong and steady drumbeat generates a grounded feeling so you don’t fly away in the midst of the singer’s soaring voice.

Up next is the delicate sounds of “Unaware” with audible acoustic guitar strums backed by a semi-painful violin and a sweet, melancholic melody from the piano as Juvicsa sings about a lover who is unaware of the effect that they have on the other person. “Slow” follows, initially bringing in a sultry R & B-esque vibe with Juvicsa’s desirous and tender voice pulling you in, until the pace picks up and we experience a more dancey, electronic vibe, making for a well-rounded track that you’ll want to play over and over. The piano takes charge in “High Tonight,” and- Juvicsa’s voice imbues the song with a forlorn feeling over saying good bye, but in a way that says I’m strong enough to handle whatever life throws at me– don’t cry because it’s over, smile because it happened.

“Now,” the final song on Eyes to Land, brings the EP to a close with a powerful ballad with Juvicsa’s voice switching between being deeply soothing and downright energetic, at times belting out the harmonies with a fierce and guttural sound that sends shivers up the spine.

Produced by Federico Angel, Eyes to Land is catchy, touching and emotionally charged, the perfect vehicle to showcase Juvicsa’s astonishing range as both a singer and songwriter.

Overall the EP offers the perfect ebb and flow between slow seduction and invigorating energy. With bittersweet lyrics that sway between nostalgic memories of the good times and the fire that comes when you’ve found the strength to move on, Eyes to Land is the perfect EP to throw on a few weeks after a breakup, when you’re done wallowing and ready to reclaim your power, but still feel some of that melancholy residue that naturally comes with saying farewell to a lover.