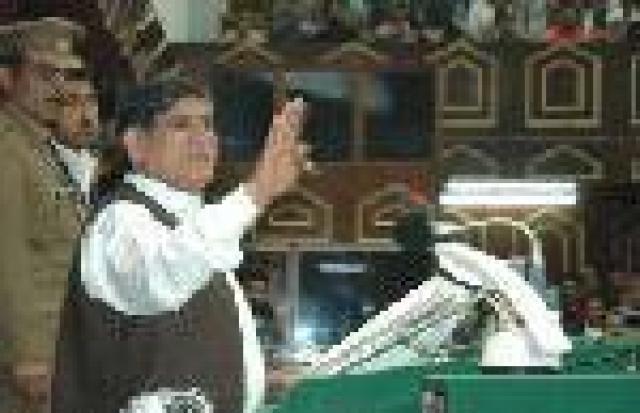 Speaker of Jammu and Kashmir Legislative Assembly, Mohammad Akbar Lone on Monday adjourned the House sine-die that met for Vote-on-Account on February 25.

Lone thanked the administration for extending its cooperation in conducting the business. He appreciated the Government for coming up with detailed replies to the questions raised by the Members during the Session. He also extended thanks to Information, Doordarshan, Radio and Media for exhaustive coverage of the business conducted during the Session.

The Speaker also appreciated Ch. Mohammad Aslam for his contribution as Speaker Pro-tem, besides Deputy Speaker, Sartaj Madni for conducting the business of the House in his absence.

Giving details about the business transacted during the Session, Lone said  that out of  555 questions received for the Session which included 311 starred and 244 un-starred, 450 were taken up for oral and written replies, adding that only 41 questions were taken up during the current Session on which 189 supplementaries were asked by the Members. He said 11 Government Bills were received, out of which 10 were passed and one was introduced. He said out of 19 Private Member Bills received, one bill was introduced while nine were pending.

During the Session, five notices were received for half-hour discussions, out of which only three were allowed.

The Speaker informed that Members spoke for 11 hours on Motion of Thanks on Governor’s Address, while five hours were consumed on the discussion on Vote-On-Account

Earlier, Minister for Finance, Planning, Law and Parliamentary, Abdul Rahim Rather assured the House that Government would make every effort to fulfil the assurances made in the House during the Session. He said despite being short, the Session was effective as important public issues were highlighted by the Members.

The Minister appreciated the newly-elected legislators for highlighting public issues with great confidence.

Acknowledging the cooperation extended by the Opposition Members during the Session, the Minister said their enthusiastic participation in the business was fruitful for effective working of Government as it got extensive feedback about the public problems.

Earlier, the Speaker invited Members from Opposition and Treasury benches to express their views about the business conducted during the Session.