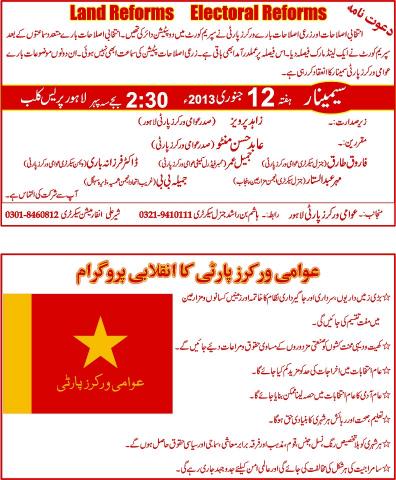 LAHORE: Speakers at a seminar have demanded that the Supreme Court’s (SC) judgement on electoral reforms be implemented in letter and spirit and feudalism be ended in the country.
The Awami Worker’s Party (AWP) arranged a seminar regarding electoral and land reforms at the Lahore Press Club on Saturday, which was attended by human rights, peasant activists and intellectuals.

AWP General Secretary Farooq Tariq said that the Workers Party Pakistan had filed two petitions regarding electoral reforms and land reforms. He said that Abid Hassan Minto, who is now president of AWP, had led the fight to take big money out of electoral politics.
“This was a landmark case that the media failed to highlight or discuss… the left’s contribution in this regard cannot go unnoticed,” said Farooq Tariq. Speaking in detail about the land reforms case, he said that the party had a pending case related to Shariat court ruling terming land reforms un-Islamic. He said that the issue of land reforms remained of great importance.
Anjuman Mazareen Punjab General Secretary Mehr Abdul Sattar thanked Abid Hassan Minto for his lead in both the cases. He said that if the ruling regarding electoral reforms was followed, the road for big money and landowners to political power could be blocked.
“I feel that if the ruling is followed then workers, peasants and average humans can come to power,” said Sattar.
He said that land played role in Pakistan’s economy but today the landowners who are in parliament and the government only worked for their class interest.
“The state institutions such as Army Welfare Trust and others have held hostage the people’s land, making it difficult for peasants to survive,” said Sattar.
Jamila Begum, who has been leading the 30-year-old struggle of tenants in Dera Saigol, said that police have kept AWP’s Ghulam Dastagir in jail for the last three months in fake cases.
“The feudal and capitalists have wreaked havoc while the peasants and workers are slave… Pakistan is supposed to be for the masses and not this small elite,” said Begum.
AWP federal working committee member Professor Jamil Omar said the situation of the working class was deplorable all over the country. Omar also highlighted the history of land reforms, rights and the impending inequality visible in the Pakistani society. He said 20,000 big landowners have the land equivalent to that owned by 15 million people.
AWP President Abid Hassan Minto said that the seminar was arranged not only to explain the petitions but rather issues at hand.
“Elections have become play of power and big money… the other we say is that it’s the part of the system of feudalism,” said Minto.
He said that he had filed the cases in 2011 but they were first heard in 2012. The media was uninterested despite the presence of many media houses at the Supreme Court, he said.
He said that on the recommendations of SC, they involved 28 political parties but still the major political parties abstained from being party to the case.
“Since this ruling there has been only silence… but breaking this silence, we have taken this issue to the ECP,” said Minto.
AWP Information Secretary Sher Khan, Ms Shazia and others also spoke on the occasion.
http://www.dailytimes.com.pk/default.asp?page=2013%5C01%5C13%5Cstory_13-1-2013_pg13_6
Filed under: Politics, World
Share Tweet Pin G Plus Email
previous article: There Are People Who Sell Their Health For Wealth
next article: Mukesh Ambani Speaks about RIL’s Growing Bonding with Gujarat