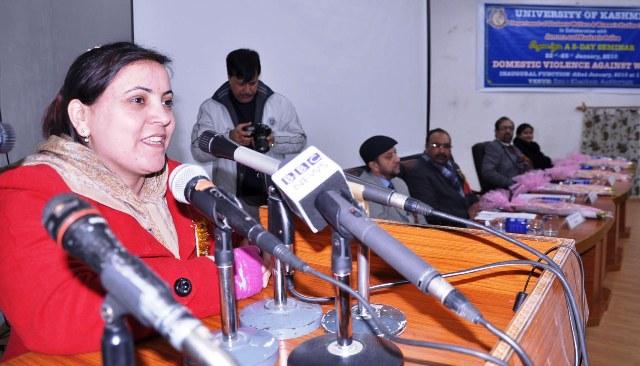 , January 22 (Scoop News) -:J&K lone woman  Minster for Social Welfare, Sakina Yatoo on Friday  called for a change in the peoples’ attitude of “getting sad over the birth of a girl child.” “It is from here this violence and discrimination against women starts. So there is need to change this mindset and ensure that women are not discriminated against,” she told a gathering of academics, officials and members of civil society.

“We need to address this issue effectively in a coordinated manner. And everybody, including people, government and police has to play a role in curbing this problem,” said Sakina, while addressing a seminar at the .

The two-day seminar titled “Domestic Violence against Women” is being organized by the University’s Department of Students Welfare in association with the Police.

Sakina lauded the role of the authorities in creating awareness among people on various societal issues by holding regular seminars and conferences.

The KU vice-chancellor, Prof Riyaz Punjabi, asserted that there was need to increase the level of awareness among women and their rights. “Women must know about their rights and the way they can fight for them,” he said, adding the civil society, media and government has to launch a coordinated movement in this regard.

Prof Punjabi, who delivered the presidential address, said men and women have to understand their individual responsibilities so that there are no changes of any friction which can ultimately result in violence. “We at the university are trying our level best to address these issues and aware people about them, but at the same time, everybody including the NGOs have to come forward and contribute their bit,” he said.

The Inspector General of Police (Armed), Dilbag Singh, said the “menace of domestic violence” was very much prevalent in . “Since 2006, there has been an annual increase of 12 percent in incidents of domestic violence against women. In this regard, empowerment of women can go a long way in curbing the problem. And police alone cannot do it. Civil society has to come forward and play its role,” he said.

In his written message to DSW, Prof Pam Rajput, member of UGC’s Consultative Committee on Capacity Building of Women Managers in Higher Education, said globalisation has led to an increase in violence against women. “To combat the problem, the first and the foremost thing we have to do is to treat the problem as a societal one rather than personal,” he said.

The KU Registrar, Prof S Fayyaz Ahmad, said the varsity was committed to address the issues concerning the society.

The KU’s DSW, Prof Neelofar Khan, described domestic violence as a “silent killer” which affects the overall management of family affairs. “Our aim to hold this seminar is to create awareness about the issue and see how we can address it effectively,” she said.

The KU’s Public Relations Officer, and Assistant DSW, Showkat Shafi, presented the vote of thanks. Dr Aneesa Shafi, Head, Department of Sociology, presented a paper on “Role Conflict among women: A pavement to domestic violence.”

The function was attended by senior KU academics and police officers, including HK Lohia, DIG, , . Officers from IRP 1st battalion, Zewan Srinagar, and JKAP 6th Batallion were present on the occasion.