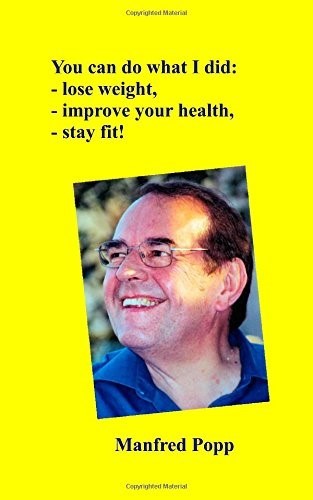 (1888 PressRelease) The author explains, on the base of his own experiences, how it is possible to lose weight, to realize fitness and to get a good health!

Are you concerned about your health? Your blood pressure is too high? You are struggling with your weight or you do not feel fit?

If so, then you should read this book. It offers you a practical step-by-step guide to improve your health and fitness.

Over a period of nine years, from an age of 64 up to 73, the author practiced the guidelines published in the book himself. Now, he benefits from the impressing results:
– He has lost approximately 45 pounds.
– The upper blood pressure remains stable in the “healthy” range.
– The lower blood pressure also moves in the “healthy” range.
– The pulse rate has leveled in an optimal range.
– His general health condition has improved significantly.
– His physical condition is much better than before.

The key to success was an increased, but still reasonable, physical exercise combined with a healthy diet. After nine years, the health of the author improved significantly – without any additional medication.

In sum the author is convinced that his program also works for other “best agers” as well as for younger peoples.

The author Manfred Popp was born 1941 in Heilbronn / Germany. When his father was killed in war in Russia, the mother moved with him as an infant to the grandparents in the Black Forest. After finishing High School, he studied economics and earned his degree at the University of Munich. In the following years he held several management positions in industry and worked as an independent business consultant for small and medium-sized enterprises. With 64 years he ended his career and retired.

Shortly thereafter the author has retired, he visited the doctor to perform a health check and it turned out that his blood pressure was clearly too high. His doctor said that either he has to take pills for the rest of his life or his excessive weight has to be reduced by at least 33 pounds. He bought the tablets and his wife read to him at lunch with emphatic clarity the long list of side effects. It became vividly clear that he had to make a fundamental decision.

The author chose the weight loss. By following the diet and training plan developed by him, he managed to reduce his weight by about 44 pounds. His goal was not only to achieve this weight loss, but the real challenge was to keep the lower weight in the long run. Therefore, his action strategy did not include a crash diet. He was aware that this could mean nothing more than changing his lifestyle with the goal to maintain a lower weight in the long term.

Since friends insisted several times to learn about the secrets of his success, he decided about 5 years ago to write his first book in German. (More information can be found on the author’s German Website http://www.buch-abnehmen-popp.de/)

Two years later, an extended revision of the German book was published.

Now, in the age of 73, he releases his first English-language book titled:
“You can do what I did: lose weight, improve your health, stay fit!”

See also: http://www.book-weight-loss-popp.com
The title is available as eBook or as printed book (for example AMAZON, CreateSpace).