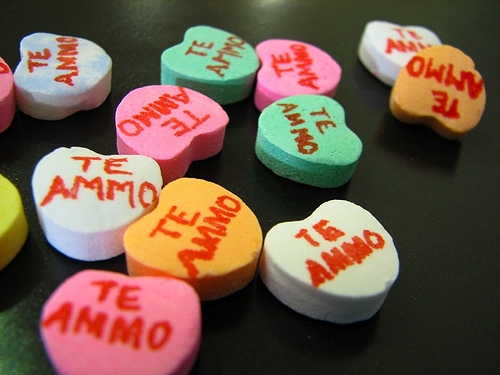 Who you are is not really clear to many historians but you stand for love, which is commendable. However, every year you make more people feel terrible about life than Hannity & Colmes, runway models, and the New York Knicks combined, which is a lot of damn people. Because of you, I have to constantly shout at my television screen while I am hungover with no pants on that I can’t afford to buy anything at Kay Jeweler’s, and that even if I wanted to, there is no girl I currently know that would accept any fine cubic zirconia that I would purchase at said establishment anyway. I don’t know anything about eating dinner at any place that does not require you to bus your tray after you have finished your meal. Because of my financial inability to obtain a haircut at regular intervals, combing my hair so as to appear attractive to the opposite sex has become more difficult than ever, thus further handicapping any chance of I have of participating in You-Day. I think it also goes without saying that my psychological inability to wear shoes that do not have Swooshes on them for extended periods of time limits my chances as well. You don’t even get everybody a day off from work; at least St. George killed a totally badass dragon.

Also, I bet you think it’s pretty damn funny that millions of mothers around the country are gearing up to send their sons platonic You-Day cards because they are well aware of our lack of prospects, and can’t bear to think of us walking past well-adjusted and legitimately happy couples on our way to work today. Next time you are hanging out at church and my mom is lighting candles, let her know it’s not necessary, and that I’ve just really been too busy to go out and meet more girls these days. She worries. To sum up, you remind me and a whole lot of other people why we are undateable in the first place, and you do it by celebrating and spotlighting the people who are. That’s like holding a press conference listing the annual Fortune 500 at a Salvation Army headquarters.

On the other hand, you let significant others who pretty much get ignored the other 364 days a year a day to feel good about themselves and their relationships. Some people only get today to feel romantic, or to use it as an excuse to be. Also thanks to you, many people may feel prone to acts of kindness today, or a willingness to help out others who forgot it was You-Day. You have the ability to make really hard-assed authority figures mellow out as well, if only for a day, and the idea that there may be free candy at schools educating students from K to 1L is uplifting to say the least. And who’s to say that some of my fellow undateables and poverty cases aren’t celebrating today together either? After all, a horse had to mate with a donkey to make a mule at some point. Romantic love is one of our only redeeming qualities. If we aren’t blowing shit up somewhere, we’re making holes in some kind of layer someplace else, and while we’re not doing that, we can’t even stop making Hugh Grant movies. Something like romantic love is worth celebrating. Besides, You-Day stands as a glowing beacon in the middle of a month that Garfield, the greatest morbidly obese cat-philospher of our time, accurately referred to as "the Monday of months." I never really get that excited about lasagna, however.

I guess what I am trying to say is that you are like Paris Hilton in that I find the way you put yourself out there as really obnoxious but if you ever wanted to let me participate in your activities I definitely would.

Filed under: Music & Film
Share Tweet Pin G Plus Email
previous article: Spill over effects of instability in Afghanistan
next article: Alcohol protests in front of the Bulgarian National Parliament