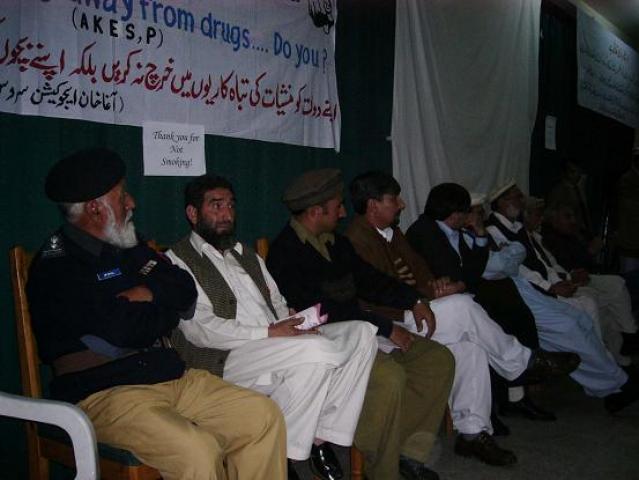 One day seminar on Anti Drugs and anti Narcotics

CHITRAL: A day long seminar was held on anti drugs and anti narcotics abuse organized by  Aga Khan Social Welfare Board in collaboration with other organizations of AKDN.  Sub Divisional Police Officer Shamsur Rehman was chief guest on the occasion while the ceremony was presided over by Miftahuddin ACO Chitral. Addressing on the occasion Maulana Khaleequz Zaman Khateeb Shahi Masjid Chitral said that Islam has banned all components and types of drugs and narcotics. He said that drug addicting not only tantamount of disobeying of Islamic principles and rules but causing harmful physically and  disgracing in the local society. He said that if we follow Islamic principles there would be no one drug addicted. He quoted maxims of the Holy Prophet when liquor and wine was banned in Islam Muslims damaged all stocks of wine. Mrs. Shakila briefed the participants regarding causes of drug addicting in Chitral and role of AKSWB in drug controlling among the society. She said that AKSWB working in different portfolio like socio economic development, prevention and substance abuse, senior citizen, marriage support program, family harmony  and women development. She said that we also try to detail a pressure group in the local society who work side by side with these organizations who discouraging drug trafficking and addicting. We work on detoxification and creating awareness among the masses regarding bad impact of drug addicting. She said that we treated some 706 patients who were drug addicted.

Dr. Inayatullah Faizi a local intellectual presented his key note on drug position in Chitral. He said that Muslims community frequently visiting Kalash valleys where they drink and purchase liquor and local wine from Kalash people. He said that most of our students are addicting of Opium, Hashish and wine. As well as tincture spirit and other medicines are openly selling in chemists and druggist shops but there is no one to stop it. He said that anti narcotics squad in police department was winded up on unknown reasons. He also lamented role of organizations working on human rights who also supporting drug traffickers accused. He said that liquor and wine (Tara) is preparing in Chitral in local factories. As well as the courts consider that police arresting people involve in drug and narcotics wrongly. He said that smugglers use children, women and disable persons for their anti social evils and drug trafficking. He said that opium were cultivated in Baleem and other parts of Upper Chitral which were banned voluntarily but now Hashish and other narcotics reach there from Tirah and tribal areas but local administration kept silent spectators in this scenario. He quoted example of a honest police ASI at Ashriat police post who arrested an influential person with drugs but he was dropped in government vehicle the other day as a result honest police officers badly discouraging and disappointing. Which show that law enforcement agencies supporting these criminal people and police badly failed in drug controlling. China awarded death sentence to million of people on the direction of Mauzatang who involved in drug abuse.

Mrs. Razia Sultana of AKSWB  highlighted main objectives which play vital role in eradicating drug addicting and discourage narcotics. A group of panelist comprising over 9 intellectuals responded different questions asked by participants. The participants expressed great concern over that thee is no Drug inspector in Chitral and that is why no check and balance of chemists. At last it was decided to detail a committed comprising over religious scholars, social workers, government officials and intellectual to frame strategy for eradicating drug abuses from the society.

Woman delivered 4 children at a time in THQ Hospital Drosh.

CHITRAL: A woman delivered 4 children at one time in Tehisl Headquarters hospital Drosh (THQ Hospital) some 45 KM from here. Medical Officer In-charge of the hospital Dr. Iftikhar told this scribe that a woman namely Pari bibi wife of Juma Rahman resident of Dhameel was carried to this hospital in serious condition. She had delivered 1 baby at her home but was still feeling pain and  was immediately shifted to labor room where she delivered 3 more children. Two were male and two female babies hence all four babies were died soon after their delivery due to weakness and other problems.