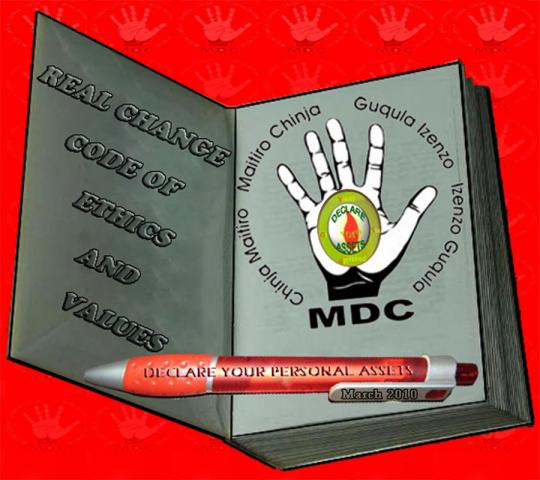 “This code shall apply to all elected, appointed or deployed officials of the MDC serving in the Party, Government, local authorities, any institution receiving public funds, parastatals, voluntary associations and any other public or private body howsoever defined,” part of the code of ethics reads.

This code is the first of its kind to be crafted and implemented by a political party in southern Africa and it will have strict guidelines that will apply to all MDC public office bearers.

“Article 3 of the MDC Constitution captures the values of the Party; of solidarity, justice, equality, liberty, freedom, transparency, humble and obedient leadership and accountability as its core founding values”.

Among other issues, the code of ethics and values will also boost and maintain the public’s confidence and trust in the integrity of elected, appointed, deployed or representative officials of the MDC. The benchmarks would also provide a legitimate and transparent measurement and yardstick for the evaluation of all MDC representatives.

Among other issues, all MDC public officials should by 13 January of each year deposit with a known legal law firm, a list of all immovable property, movable property and liabilities in and outside Zimbabwe.The MDC officials shall also perform their official duties and arrange their private affairs in a manner that allows closest public scrutiny, an obligation that is not fully discharged by simply acting within the law.

The party is all the majority party in the House of Assembly after winning the 2008 March harmonised elections in which President Tsvangirai beat Zanu PF’s Robert Mugabe in the presidential election. Meanwhile, the MDC has established an independent investigations commission that will probe any allegations of corruption brought against the party’s officials. The commission is made up of various eminent individuals and the names will be made public by President Tsvangirai soon.