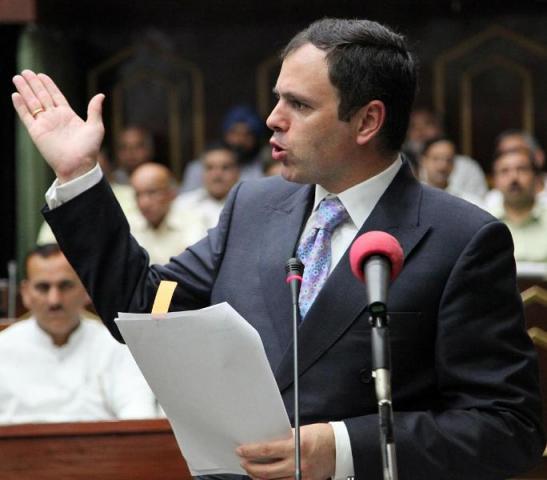 ,India (Scoop News)):-J&K Chief Minister,  Omar Abdullah said , “Without creating any hype we have reduced 35000 army personnel in and also decreased the number of CRPF and BSF men from the internal duty.” Process will continue in accordance with prevalence of peace.he added.

In a marathon 130 minutes speech in Legislative Assembly on Thuresday evening, while replying the discussions on grants,  Omar said with the gradual restoration of peace and tranquility, the footprints of security forces in the state will lessen and Jammu and Kashmir Police be on frontline to deal with law and order.

He dwelt on every aspect of the performance and policy planning of the departments under his charge and replied all queries meticulously raised by 35 Members through 73 Cut Motions.

Omar said that the track record of his Government’s last one year is testimony to his commitment to zero tolerance and upholding Human Rights under all circumstances. “I don’t want to count the number of killings and draw comparison of it during various periods. This de-humanizes the human tragedy and before me even a single innocent killing is more than huge”, he maintained.  Omar said that security forces have been sensitized to exhibit extreme restraint while combating militancy. “We want to ensure that there is no loss of innocent life during the operations against militants”, he said, elaborating that damage to the property can be made good but the loss of life is irreparable.

Referring to the PDP blame that he had gone to requesting for handing over the BSF officer and personnel accused of killing the young boy of Nishat, Zahid, the Chief Minister said that for ensuring justice to an innocent and booking the culprits, he is ready to make hundreds of such requests without feeling ashamed. “I will pursue my agenda to protect the Human Rights and stand like a rock against all HR violations”, he added.

Observing that development is co-related with peace,  Omar said that the large scale works programme initiated across the State, especially in remote and far-flung areas by his Government could be successfully accomplished when peace dawns fast and a tranquil atmosphere is created. “All of us have to work jointly in this direction”, he said, adding that the atmosphere is more or less better currently as compared to the past. However, the increase in infiltration attempts during the year 2009 have affected the security scenario in early 2010. “This aspect is being taken care of”, he added.

On stone-pelters issue,  Omar said that the elders of various areas have given undertaking to the police about those arrested for the offence and the Government is considering their release. He expressed astonishment over the behaviour and approach of PDP vis-à-vis stone-pelters, saying that Syed Ali Shah Gelani and Mufti Azam Kashmir, both have condemned the practice but PDP is trying to defend the offenders. “We have a record that SP of a particular area was approached by a Member of PDP for release of some arrested stone-pelters, describing them as their works”, he informed the House, adding that the SP replied that stone-pelters are stone-pelters and will be dealt accordingly.

The Chief Minister said that it is easy to dream but very difficult to realize the dreams and referred to the establishment of and Islamia University of Awantipora. “Both the Universities were initiated without arranging funds for these”, he said, adding that during the year 2003-04 Baba Shah University received only Rs.1 lakh funds and in the year 2005-06 no fund was allotted to it by the then Government. “During 2006-07 it received Rs.10 lakh and no money in 2007-08. During my tenure, University received Rs.177 lakh for 2009-10 and allocation of Rs.325 lakh has been earmarked for the next financial year. Same is the case with Islamia University, Awantipora which was allotted no funds in 2005 to 2007, Congress led Government provided Rs.1.39 crore to it and my Government Rs.3.50 crore in 2009-10”.

Quoting the maxim that “those who live in glass houses should not throw stones on others”, the Chief Minister advised PDP not to indulge in compelling him to open their record. “Their this practice will boomerang on them”, he said. He said that the records of the Assembly speak loud and clear about the PDP’s voting against the rehabilitation policy resolution tabled by  M. Y. Tarigami in the House then.

“The rehabilitation policy we are working at provides for dignified entry of those  youth who have not resorted to gun and want to live a peaceful life without carrying the stamp of surrender on their backs”,  he said adding that the surrender policy was an initiative of PDP Government.

Referring to the expenditure made under District Plan during the current fiscal by the end of February,  Omar said that he is happy that the challenge of spending huge funds within the shortest possible time has been accomplished and districts have received 80 percent expenditure by the end of February this year. He said the Government is contemplating to invest over Rs.10,000 crore on development projects during the next financial year and a proper monitoring mechanism has been put in place, involving third party monitoring by NABCOM and Meckanzy International to ensure judicious spending.

Omar said that considerable thrust is being given on the power generation and upgradation of LT/HT distribution and transmission system besides reforming the sector. “We are introducing two important Bills in the House in this regard”, he said, stressing the need for major reforms to check power theft and transmission leakages. He said various Hydro-electric projects have been envisaged in the next five years to raise the generation from the present 2500 MWs to 6000 MWs.

Omar said that the District Development Boards are being further strengthened and other representative bodies like panchayats and local bodies would be equally made effective to undertake the development at grass roots. He said during the current fiscal Rs.413 crore worth additionality has been granted to the districts. Of this, the districts in division received Rs.203 crore and division received Rs.210 crore.

On the unemployment issue,  Omar said that a holistic view has been taken under Sher-i-Kashmir Employment and Welfare Programme for Youth and more than 20,000 educated persons have been provided employment during his tenure of last one year. He said the measures underway to address this crisis are likely to yield positive results.

The Chief Minister said that the doors of the Government for talks with employees are always open and the matters could be amicably discussed and addressed across the table. “The employees and the Government are members of the same house and the confrontation between the two will result in damaging the interests of both”, he said, urging them to shun the practice of lockout and hartals for the larger interests of the state and its people.

Replying to a query raised by  M.Y. Tarigami, the Chief Minister said that the ration money for Police personnel is being enhanced from Rs.600 to Rs.1000 for which a proposal has already been formulated. In reply to his other question,  Omar said that elections to panchayats and local bodies have been scheduled for 2010 to empower the public representatives at grass roots.

The House later unanimously passed the Motion for Grants moved by the Chief Minister for funds to defray the charges on various accounts for the departments under his control for the year 2010-11.

Filed under: Politics, World
Share Tweet Pin G Plus Email
previous article: Nokia in Five
next article: The president of India is elected by indirect voting