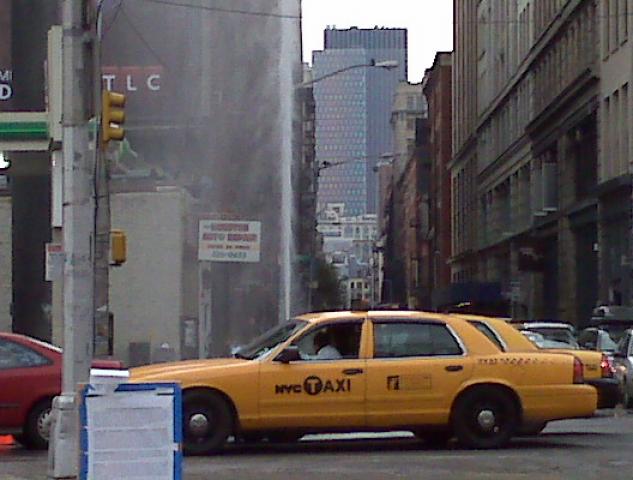 Tourists and Soho residents were greeted by a 30-foot column of water Sunday afternoon next to the gas station at Houston and Crosby.

“Someone backed over a hydrant!” concluded one passerby.

But this was no accident.

“Want to know why this is happening?” asked a young woman handing out flyers.

Her press releases informed that the geyser was a “temporary public artwork” by Clement Price-Thomas, titled Whilst you’re Sleeping. The work was meant to launch “a discourse with the people of the city about what is taken for granted everyday[sic] and what is suppressed by both man and city.”

Its duration was just a few hours, from 12pm to 4pm on November 4th.  Clement Price-Thomas is quoted as saying that “making an event like this exist for a short period of time…opens up the possibility of seeing through the daily repartition.  Expressing a momentary equilibrium, the work looks real, but is not necessarily what it appears to be at first glance.”

“They teach you to talk like that in art school,” said interactive artist Phil Worthington upon reading the materials.  Worthington, who is part of a group exhibition at MoMA in February 2008, is a graduate of the Royal Academy of Art.  Looking back up at the gushing water, he said, “seems a bit wasteful to me.”

Filed under: Music & Film, US
Share Tweet Pin G Plus Email
previous article: It’s time to pay you back
next article: The Wealth of the World