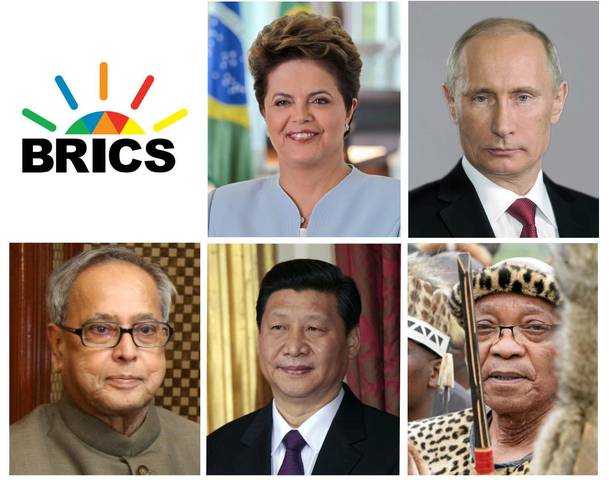 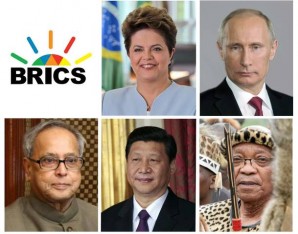 A new International bank called BRICS (An acronym for the economies of Brazil, Russia, India, China and South Africa combined) was recently launched in an apparent effort to break the dominance of the US dollar in global trade, as well as dollar-backed institutions such as the International Monetary Fund (IMF) and the World Bank. The bank, championed by Russia’s Vladimir Putin will be headquartered in Shanghai.

The new bank will provide money for infrastructure and development projects in BRICS countries, and unlike the IMF or World Bank, each nation has equal say, regardless of GDP size.

With one exception, the key players are predictable. Russia, Brazil, India and China seem obvious soul mates as there will clear mutually beneficial gains from a rogue enterprise of this nature. The head-scratcher is the inclusion of South Africa as a member. This is especially puzzling in light of the fact that each BRICS member is expected to put an equal share into establishing the start-up capital of $50 billion with a goal to reach $100 billion.

South Africa, once renowned for its position of economic leadership in Africa and its mining strength, is slipping into a third world abyss at an alarming rate. It’s easy to see how the so called “Rainbow Nation” can benefit from BRICS but difficult to imagine how the rapidly failing country with notoriously corrupt and incompetent leadership on all levels can contribute to the group in any meaningful way.

Since the ANC came to power in 1994, South Africa has been on a steady decline but the country’s ills have accelerated in the last 14 years. In 2000 South African mining was still strong and accounted for 40% of the total GDP of the 48 countries south of the Sahara. In the past decade, mining, once the country’s economic engine, has been battered by wildcat strikes, causing the closure of many mines and the biggest companies have shed thousands of jobs in the face of wage demands and spreading violence.

South Africa’s external debt now totals $136.6 billion or 38.2% of the country’s GDP – the highest level since the mid-1980s. Unsecured loans, or consumer and small business loans that are not backed by assets, are the fastest growing segment of South Africa’s credit market.

President Zuma’s own out of control spending is legendary and his cabinet is one of the biggest in the world with more cabinet ministers than the US, Germany and Japan, all of which have much bigger economies and broader tax bases. Ministerial salaries are disproportionally high and the budget for The Presidency soared from R257-million in 2007, during President Thabo Mbeki ’s tenure to an estimated R1.3-billion in 2014.

Corruption and mismanagement have had a devastating impact on South Africa and while the country’s infrastructure is collapsing there is simply no money for many vital repairs and key maintenance projects. Poverty, AIDS, murder, corruption and crime all have surged, and South Africa now regularly tops the charts worldwide in terms of rape and murder and the average life expectancy has plummeted. Education has mirrored the decline with South Africa ranking 132nd out of 144 countries for its primary education and 143rd in science and maths.

South Africa has over 51 million people (not including the rising millions of illegal immigrants) and it is estimated that just 3.3 million pay 99% of all income tax. A study by the Solidarity Research Institute (SRI) shows only 1,7 million South Africans are paying 80% of SA taxes.

The stringent Broad Based Black Empowerment laws that ensure a growing number of whites, who have traditionally borne the brunt of the tax burden are excluded from the job market. The white population has shrunk to a little over 4 million with an estimated 1 million plus unemployed whites now living in squatters camps. Each year thousands of qualified whites leave the country in search of work. South African whites are already subjected to an unprecedented campaign of murder, torture and robbery which is not helped by the President publically singing songs encouraging the murder of whites and further racism.

This continued anti-white attitude of the ruling party and failure to deliver has given rise to a new political party called Economic Freedom fighters (EFF) which is growing at an alarming rate. EFF is a party with a policy which demands the nationalization of land, mines, banks and other assets without compensation and, in particular, on a racial basis. According to a recent survey, 42 % of young blacks approved of “land reform” as defined by the EFF party.

With a failing economy, political uncertainty and incompetent leadership the question of South Africa’s suitability as an economic partner in the BRICS venture is questionable at best. Most of the countries involved have problems but the leadership is seen to make some effort to encourage improvement and growth. With the obvious exception, these are rising economies that can enjoy mutual benefits from such an alliance.

A cursory look at South Africa indicates that the country will be nothing but a liability. It remains to be seen exactly what the likes of Russia and China extract from South Africa.