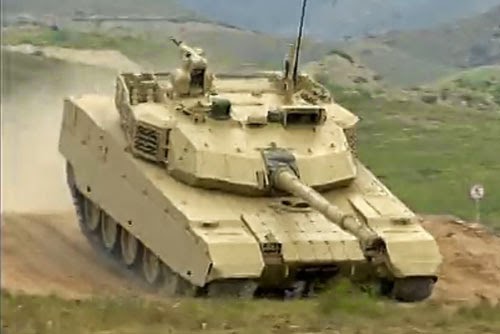 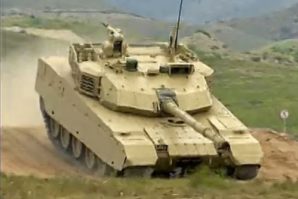 Cult of Russian-made weaponry turned to be a hallowed practice of the war-respiring Kremlin, particularly with the onset of Putin’s tenure.

Apparently, wielding unprecedented powers and tightening his grip over mass media with a special emphasis on TV, he incessantly spurs the flame of brazen militarist propaganda.

On the one hand, the history of military hardware, which was manufactured in the Soviet and post-Soviet periods, happened to be rolling around the entire Russia. Nonetheless, it was always kept under watchful eye of censure and secrecy. Still, after Putin took office the topic of Russian arms became a centerpiece of national media hue and cry.

Indeed, the parade held at the Victory’s Day in Moscow was a garish showroom of Putin’s new weapon, although in the past days such an event was viewed as a venue for meetings of Russian state big-wigs with world leaders as well as the opportunity to display to all the Russians the might of their beloved motherland.

Nevertheless, this year Mr. Putin enjoyed the company of a few heads of neighboring states and a ripple of guests from other continents, who witnessed a handful of newly-manufactured Russian armory.

In this vein, its is worth mentioning that despite top-level secrecy and lack of any technical data, Russian military experts seemed to be ceaseless in their laud and praise towards new IFV as well as a fresh make of „Armata” tank.

All along, another striking event to be noted is the reaction of China, which has been lately treated by Putin with utmost respect and dignity. In fact, Chinese media falling back on the country’s military production juggernaut „Norinco” launched a volley of incisive criticism with regards to a new Russian tank, particularly by comparing it with its tank VT-4.

Along with that, specialists in the field of armor materiel outline that tank VT-4 having been introduced to the world in 2014 through massive advertising targeted primarily to the general public as well as declared by the Chinese to be a solely export model, has no deal of advantage as long as it is still to go under heavy testing and development.

However, the only benefit of the Chinese tank, which helps it to stand out among its world counterparts, is its price coupled with loans and credits issued by the Chinese government to its foreign partners for the purchase of the respective tanks.

As the result, experts of „Norinco” suppose that under the conditions of general decrease in the demand for tanks the international customer should switch from the Russian to Chinese arms as they are much cheaper and equal in quality.

The degree of sharpness pertaining to the aforementioned Chinese comments has never happened to come by throughout the entire baggage of Russian-Chinese relations even in the times of Cold war, when China’s position towards the USSR was marked by regular wind of change.

Indeed, during the major part of the XX century the communist China was a recipient of Soviet military technologies. Furthermore, the Chinese replicas of the Soviet weaponry presented no contest to the original items, nevertheless gave China a splendid opportunity to grow politically in all continents.

However, in the second decade of the XXI century Chinese military production has developed its capabilities to the level, when it is able to manufacture single-handedly the entire scope of military materiel practically from the scratch. Nevertheless, Chinese quality and technological prowess leaves much to be desired.

Apart from that, China is set to extend its influence on the world arms market, especially in the countries of the third world, which will lead to a head-on collision with Russia still being a key sponsor to China in terms of military technologies.

Consequently, a sign of humiliation on the part of China towards Russia should be regarded as nothing else but a clarion call for fight to Kremlin.

In that light, Vladimir Putin should come to terms with the notion that his curry-favor policy with the Chinese has been shattered to the ground as their feel themselves too confident to show due heed and respect to a dilapidating neighbor, which drove itself into the sea of problems and tries to misguide its people by useless external saber-rattling.