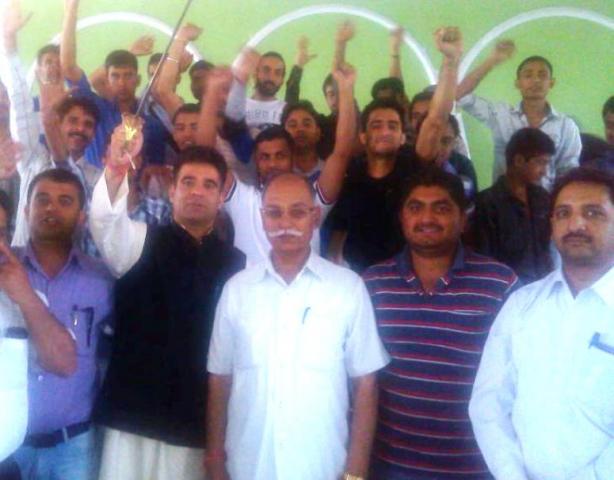 Udhampur/ Jammu, April 16 (Scoop News) – BJYM State President Ravinder Raina  accused Congress party as anti Dogra Party as it  failed to come up to the expectations of the Dogras is  more responsible for the all round degeneration of the Dogras.

Ravinder Raina was addressing a youth rally at Udhampur organized by the local unit of the BJYM.

Ravinder Raina   said soon after 2008 assembly elections Congress Party changed colours immediately and  entered into an unholy alliance with the NC and gave unstinted support to whatever the National Conference did to jeopardize the interests of the nationalist Dogras. Raina said Congress MLAs from Jammu  including ministers, gave unqualified support to the anti-Jammu policies evolved and implemented ruthlessly by the NC, and became a party to the decision of the Omar Abdullah-led government to erode the very identity and personality of the Dogras.

He said the anti Dogra approach of Congress Party exposed when Congressmen allowed National Conference to revoke the order for providing Dogra Certificate to Jammu youth to get benefits for recruitments. Raina  said 28 March- 2011 order under which the Dogras were entitled to obtain from the concerned revenue authorities a ‘Dogra certificate’ but  NC-Congress coalition government revoked the order under pressure from Kashmiri separatists and communalists, on the plea that the issuance of Dogra certificates to those in Jammu desirous of joining the Central paramilitary forces, including the Central Reserve Police Force (CRPF), would weaken their over 20-year-old anti-India movement and facilitate the rise of Duggar Desh.

Raina said Congress backstabbed Dogra’s by  joining hands with  the anti-Dogra and anti-India forces in Kashmir to prove their secular credentials and demonstrate that they would always be at the back and call of separatist  leaders,  He said Congress  party  approved all the anti-Jammu and anti-Dogra policies carried out by its coalition partner, National Conference by tooking all those who poured venom on the Dogra rulers, especially Maharaja Hari Singh who acceded to India.

Addressing the youth BJYM State general secretary Inderjeet Singh Sambyal said that New recruitment policy for nationalist youth and surrender and rehabilitation policies for terrorists adopted by Congress-NC government would discourage the youth and encourage the terrorism in the State. He said BJYM after Yuva Adhikar Yatra, will launch a mass youth movement to through out this anti-national and anti youth Congress-NC government from the power. Others who spoke on the occasion were Advocate Dinker Gupta, Advocate Naresh Bhagat, Sachin Gupta and Naresh Sharma. BJYM district President Ramneek Sharma presented the vote of thanks.