A high-profile event highlighting the freedom movement for Iran took place in Paris yesterday. All the prominent dignitaries and policy makers were in attendance at the event. This event has been happening for last eight years, arranged by the National Council of Resistance of Iran, headed by their President, Maryam Rajavi. 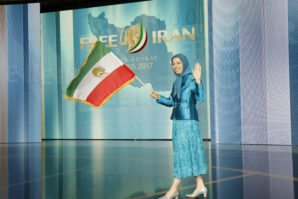 Delegations from 5 different continents including US, UK, Germany, Syria, Canada, Jordan, Belgium, France and Egypt participated and expressed their views in support of Maryam Rajavi as the best alternative to the current Iranian regime.

Maryam Rajavi started her speech by thanking all the attendees and expressed joy over the relocation of 3000 prisoners from Iraq to Albania and hailed it as a victory and blow to the regime. She stated, “Winds of change have started to blow in our homeland. The ruling government is in disarray. Iranian people are simmering with discontent, and internationally the regime is receiving backlash. The same volatile situation speaks to three fundamental truths for obtaining freedom in Iran, and peace and tranquility in the region. First, the imperative of overthrowing the ruling religious dictatorship. Second, the regime’s overthrow is within reach. And third, a democratic alternative and an organized resistance exist, which is capable of toppling the theocracy in Iran.”

She also claimed that the mullahs had engineered the results of the recent elections and that the whole thing was a sham. By “engineering” the election and fabricating the vote tally, the mullahs claimed more than 70 percent of Iranians had voted for their executioners. A month later, however, the Assembly of Experts issued an official statement in which it declared that under the mullahs’ Islam, “people’s vote, demands, and views” have no importance whatsoever.

In recent elections, the mullahs tried to improve the regime’s situation. But instead, they destabilized their government. The reality is that the overthrow of the religious dictatorship is possible and within reach because of the government’s incompetence, including its inability to contain the country’s economic disintegration and environmental disasters, the failure to provide basic needs of our people, its inability to obtain nuclear weapons, and its failure to consolidate the regime.

She concluded by saying that Khomeini and other leaders must be held accountable for violations of human rights and crimes against humanity. They must answer the nation and face punishment for the 1988 massacre of 30,000 political prisoners. Time is up for the mullahs, and a new Iran will become a reality soon.