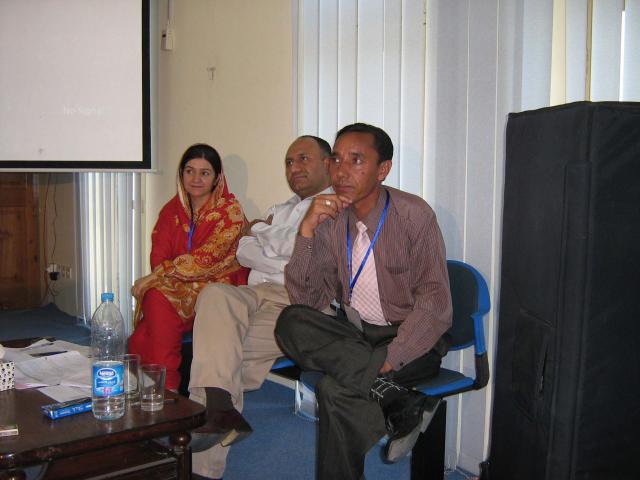 LSO Convention concluded.
GILGIT/CHITRAL: 3 days long convention for representatives of Local Support Organizations was concluded on Tuesday. Chief Secretary Northern Areas Babar Yaqub Fateh Ali was chief guest on the occasion while Dr. Ehsanuddin Registrar Kurakurum International University Gilgit also attended the ceremony. The convention was organized by AKRSP at KIU auditorium.  Sardar Hussain Chairman BLSO Chitral welcomed to distinguished guest and presented his keynote.  He said that Aga Khan Rural Support Program bring a revolution in life of common people by giving them awareness.  He said that AKRSP also achieved to bring invisible change in term of changing thoughts of the people through their social mobilization. He demanded for allocating of Lump sum fund for LSOs.  As a result LSOs will declared as strong civil society would play vital role in development of the area. Muhammad Hussain Hasrat Vice Chairman LSO Skardu thanked AKRSP for arranging this convention that was participated by representatives of LSOs from Sindh to Northern Areas. He said that RSP were playing vital role for the last 25 years but now LSO established which are playing vital role in development of the area on local basis.

He said we can develop our areas by promoting Eco and Cultural tourism. We have land resources, marine life, wild life water resources but we can,t utilize it because of lack of facilities and proper mechanism. M. Zafar Chairman LSO Gilgit paid rich tribute to Shoaib Sultan the then General Manager of AKRSP who imparted a new think to the people for brining a green revolution in the area. Miss Iram Fatma who was representing LSO Hari pore said that AKRSP plaid role as milestone in development of the area.  Muhkamuddin of AVDP quoting maxim of Shoaib Sultan that poverty can be alleviated only is joint effort and thinking. He said that this convention would be role model for representatives of LSOs,

Tehsil Nazim Chitral Sartaj Ahmad Khan thanked Sardar Ayub Regional Program Manager of AKRSP for giving opportunity to repetitive of Chitral. He stressed upon the RSPs to more strengthen these LSOs for sustainable development. He assured of fully cooperation by district government of Chitral to support these LSOs. He said that these LSOs play vital role in changing of behaviors and long-term development.
He stressed upon to promote education, health, sanitation, water and utilizing natural resources. He offered membership as secretary of Health committees for LSO.

General Manger AKRSP Izar Ali Hunzai also spoke on the occasion. Chief guest Babar Yaqub Fateh Muhammad Chief Secretary Northern Areas paid rich tribute to AKRSP and termed it a mother organization playing a milestone in development of the area. In past state was working as empire but now this concept has been abandoned because of local community mostly popular and interesting in the way of community.  He said that works under government umbrella have lack of accountability and less responsibility due to no check and balance. He offered AKRSP for joint efforts with them. He said that these joint recommendations will be enlisted in charter and any strategy and policy making will be dealt in view of these recommendations.

Different LSO arranged for demonstration of their handicrafts, medicinal plants. Productions of Chitral were highly appreciated by the masses. These handicrafts consisting on hand make sweater, cap, purse, ring (horn made) and other decoration pieces. At last representatives of government, and non-government organization briefed the participants through presentation. They were representative of Education, Environment, Agribusiness and Diversification, Micro Health Insurance and live stock and Diary department board.

Filed under: Lifestyle, World
Share Tweet Pin G Plus Email
previous article: WHY QUOTAS IF THE GENERAL CITIZENS OF INDIA ARE HARMED??
next article: Catholic Priest Charged With Molesting Boys