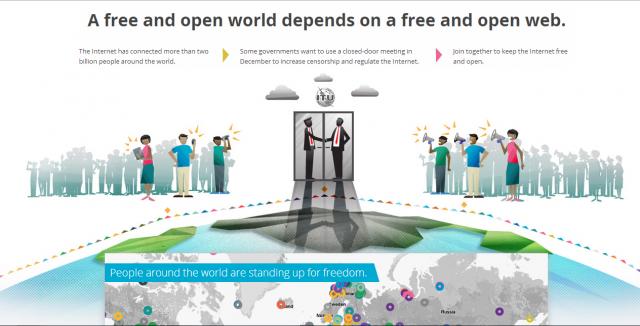 Google has recently launched a campaign for the open and non censorship of the internet. In its campaign take action  it clearly states, “A closed-door meeting of the world’s governments is starting today. The future of the internet is on the agenda. Some governments want to use this meeting of the International Telecommunication Union to increase censorship and regulate the Internet. More than 1,000 organizations from 163 countries have raised concerns about this upcoming closed-door meeting in Dubai. They are joined by hundreds of thousands of Internet users who are standing up for a free and open Internet. These people are in just about every country around the world.”

The WCIT meeting that is currently happening in the UAE Dubai has its attention from all sides and corner of the world. From the agenda leaks to the hidden motives of the big players of the cyber world, it shows the relevancy and power manipulation in today’s internet.

Google Inc being rated the top most organization in the web industry is concern with the issue of open internet in a more provocative way, it’s signing its user a petition saying and asking support for open and censorship free internet.  To be precise Google is concerned with the new Legislation the Internet Telecommunication Regulation (ITR) which is being reviewed this year. Last time it was reviewed was in 1988 where Internet Telecommunication Union this year is asking for the full authority of the internet.   Currently the internet is being looked after by ICAAN which oversees the Web’s address system, along with voluntary standard-setting bodies and a patchwork of national laws and regional agreements. Many countries see it as a U.S.-dominated system, which to some extent is controversial.

Now getting back to the point, why big search engine like Google is is advocating open and free internet.   As if you look at the current practice in developed countries like China and in some Arab countries Google has been restricted or banned which limits its reach and prospect of business. Since these countries are considered the most valued client for the internet business their restriction and limitation of reach in these country’s geography is a huge disadvantage for Google.  Looking at it from a business point of view Google looses big business opportunities from these countries.

May be wise may be not but the concept of free and open internet is certainly a concept of all but regardless the major issue of the WCIT should be more focused in issues like net neutrality and resolving the issues of digital divide  as these are the major hurdles. The Russian, US and China trying to manipulate and facilitate the power game is not a question of anyone’s concern but the internet is which needs to be understood. Internet of today has evolved as a basic commodity which needs to be standardized from all side trying to restrict and limit it is not a justifiable answer.  We all believe in standardization and should it be less or more is not a question it should be for everyone should be our priority.