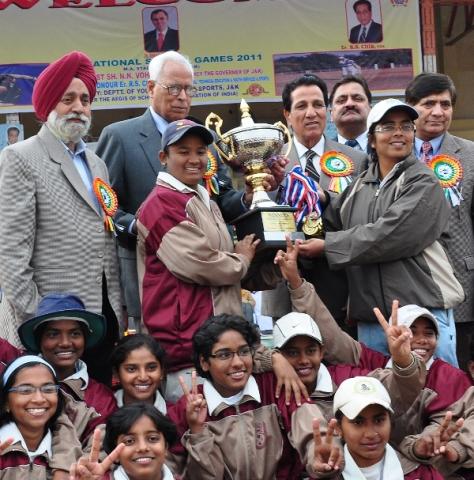 Jammu, December 20 (Scoop News) – N. N. Vohra, Governor, today stressed the high importance of promotion of sports and games and organizing the maximum possible number of national level sporting events in Jammu and Kashmir so that the youth of the State could get greater opportunities for enhancing their talents.

The Governor, as Chief Guest, was addressing at the Closing Ceremony of the 6-day 57th National School Games 2011 organized by the Youth Services and Sports Department of the Government, under the aegis of the School Games Federation of India, at the M. A. Stadium here today. During these School Games tournaments were held in the disciplines of Cricket for girls under 19 and Wushu for both boys and girls under 19 years. In all, 390 players from 19 States and of the country participated in this event.

The Governor congratulated the Youth Services and Sports Department for hosting this mega sports event in the State. He observed that whenever such national level sports championships are organized in J&K in the future an effort should be made to take the participating boys and girls from various parts of the country to the places of historical, tourist and heritage interest in J&K. This, he said, would provide the visiting sportspersons an opportunity to see the natural beauty and other places of attraction in J&K.

The Governor witnessed the final cricket match of under 19 girls category between the teams of Maharashtra and , which was won by . He also witnessed a set of Wushu demonstrations made on this occasion.

The Governor gave away Trophies and Medals to the winners and runners-up teams and individual prizes and certificates to the players for their appreciable performance during this national level sports event. He interacted with the players and wished them a bright future ahead.

The Governor was honoured on the occasion by presenting a memento to him by  R. S. Chib, Minister for Youth Services and Sports.

Earlier, on arrival, the Governor was received by  Chib, organizers of the sports event, senior officers and functionaries of the School Games Federation of India.

Speaking on the occasion,  Chib thanked the Governor for being the Chief Guest at the Closing Ceremony of the 57th National School Games and taking keen interest in the promotion of sports activities in the State.

Chib gave details of the various sports activities organized in the State during this year and the initiatives being taken for building and augmenting sports infrastructure in J&K. He thanked the Central Government for providing adequate support for this purpose. He impressed upon the participating teams to go to their States as peace ambassadors of J&K and tell the people that is as peaceful as any other place in the country.

B. A. Runiyal, Commissioner/Secretary, Youth Services and Sports, in his welcome address, gave details of the tournament.