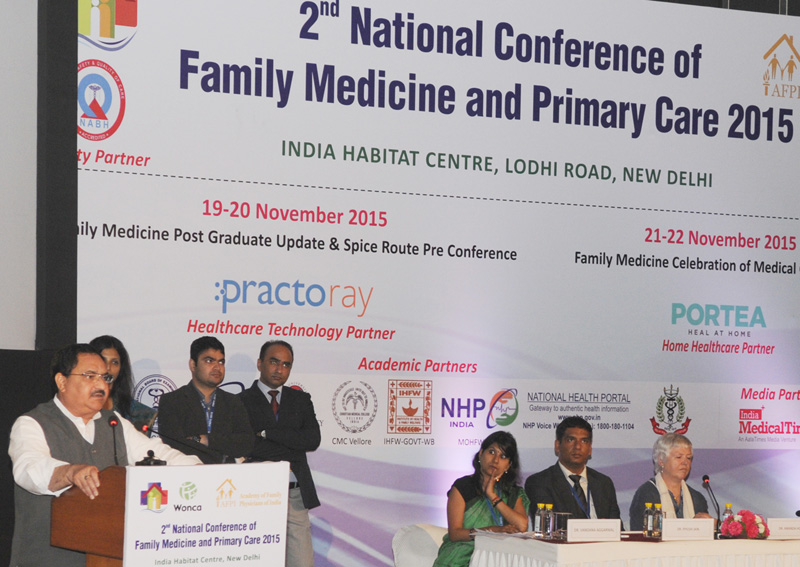 New Delhi (PIB-GR-TYP-BIN): With the aim to expand the expanse of promotive and preventive health care, and reduce the burden of Non Communicable Diseases (NCDs) in the country, the Union Minister for Health & Family Welfare, Mr. JP Nadda urged the family medicine practitioners to come up with solutions for further improving preventive and promotive health care in the country. He was addressing the 2nd National Conference on Family Medicine and Primary Care being organized by the Academy of Family Physicians of India on November 22.

Speaking at the National Conference, the Health Minister stated that the theme of the conference “Health Care is Primary” is quite relevant in the context of health care needs of the present time. He noted that at a time when the country is facing the twin burden of diseases, NCDs account for over 60 per cent mortality. He also said that the out of pocket expenses incurred by a large section of population still remain high. Tackling this burden of NCDs and high out of pocket expenses requires focus on preventive and promotive care at primary level and secondary level, the Health Minister stressed.

Mr. Nadda highlighted the role played by the National Health Mission, through its systems approach and strengthening of rural infrastructure, in catering to the healthcare needs of the people of the country. Preventive and promotive health constitutes a major component of the Mission, he further added. The Minister stated that reaching out to a vast population in a country like India requires arrangements of mid-level care providers in the rural areas.

My Ministry is working in consultation with IMA and MCI for provision of rural health care providers like trained AYUSH Doctors, Nurses, B.Sc. in Community Health, etc., he said. He added that the family medicine practitioners can play a primary role in preventive and promotive health care and especially in the rural and peri-urban areas where a substantial portion of the population resides.