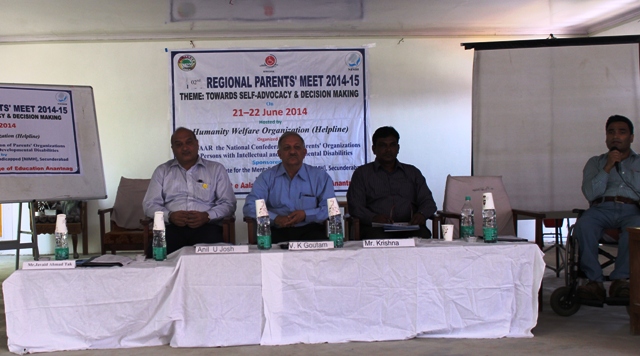 Anantnag(Kashmir), June 23, (Scoop News)- 2nd Regional Parents Meet of Association of Parents of Autism, Mentally Challenged, Cerebral Palcy, multiple disability children PARIVAAR (National Confederation of Parents’ Organisations) in collaboration with NIMH (National Institute for the Mentally Handicapped) Secunderabad was hosted by Humanity Welfare Organisation(WHO) Helpline Bijbehara at Rehmat Aalam College of Education Anantnag.
Around 100 Parents of Mentally disable children participated in the two days Workshop. The programme was inaugurated by Chairman Humanity welfare organisation Helpline Javed Ahmad Tak and President PARIVAAR, Lt. Col Dr. V. K Gautam. Members from Amritsar, Parents and family members from Amrit Parivaar Amritsar, Disabled Care Foundation Jammu, Global Institute Amritsar were also present. In all six technical sessions relating to important aspects like early intervention, Self advocacy, rights and legal aspects related to persons with Intellectual Developmental Disabilities, Cerebral Palsy, Autism and Multiple Disabilities were conducted. The parents, sibling and special educators participated and had healthy interaction to draw the optimal benefit.
During the open house discussion, two Resolutions were also passed.
The resolution reads that the regional conference of parents and representatives of persons with Intellectual and Developmental Disabilities from the states of Jammu and Kashmir, Punjab Haryana, Himachal Pradesh and Union territory of Chandigarh organised here at Rehmat Aalam College of Education in Anantnag on 21st and 22Nd June 2014 by Praivaar and NIMH ( National Institute for the Mentally Handicapped Secundarabad and they congratulated the Government of Jammu and Kashmir for its initiatives to start the Process of enacting the National Trust Act, 1999 in the state of Jammu and Kashmir.
It is understood that “The Jammu and Kashmir Trust for the Welfare of Persons with Autism, Cerebral Palsy, Mental Retardation and Multiple Disabilities Bill 2014” has already been cleared by the concerned departments of the State Government. The Meeting therefore urges upon the Chief Minister Shri. Umar Abdullah to pass the Bill in the forthcoming Assembly Session, the long cherished aspirations of thousands of persons with disabilities and their families in the state who were deprived of the benefits under this act which is in force in rest of the country for the last more than 14 years.
The National Trust Act 1999 has already benefited thousands of persons with Mental and Intellectual Disabilities in other states but not in Jammu and Kashmir the persons with Mental and Intellectual Disabilities are roaming all around without any protection and care. There educational counselling and recreational facilities for the children with Mental Disabilities are lacking in our state.
The parents of mentally disable challenged unanimously demanded the establishment of early intervention centre and Day care centres at district level. There should be comprehensive rehabilitation centres at block level also. The existing resource centres and district rehabilitation centres should be strengthened, monitored and made fully functional.
Thus the association of parents of Mental Challenged in collaboration with Humanity Welfare Organisation Helpline submit Resolution before the Chief Minister of Jammu and Kashmir for taking initiatives to rehabilitate these persons with Mental Disabilities.
Earlier Students with mental challenges of Zaiba Aapa School presented cultural and capacity shows. They surprised the audience with their talent.
Various presentations on all the four disabilities and their legal rights were presented by the resource persons from various states; like MP, Nagpur, Secunderabad and J & K. The parents of these children received technical and appropriated training to deal with these kinds of disabilities.
Mr. Ajmal Farooq presented the vote of thanks.
MORE AT http://scoopnews.in/det.aspx?q=38744