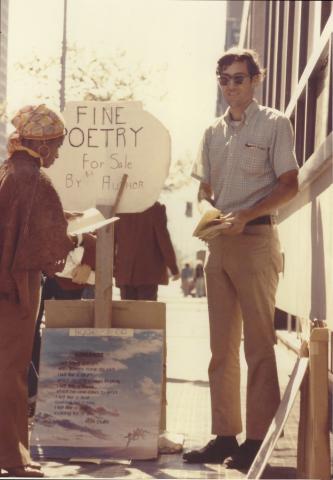 I Was A Street-Corner Poet

As a young man, for many years I made my living as a street-corner poet and door to door salesman of my poetry (1966-1975). In Berkeley, California, in the vicinity of the UC Berkeley campus, I sold my poetry door to door daily for more than two years (1966-1968). I carried booklets of my poems in a shopping bag and went door to door, primarily in apartment buildings because it was faster than going house to house. I knocked on each door, and said to each resident who greeted me, “Hello, I’m a writer. I’m selling an interesting booklet of poetry for fifty cents. Would you like to look at it? …. There’s no obligation.” I would then hand them a booklet of my poems, and wait for them to examine it and read a poem or two. I was usually treated with respect and most people were friendly toward me. I met many good people in this fashion, and some became my friends. Sometimes I was invited in to talk. I remember one fellow invited me in to chat, and ended up writing me a check for ten dollars for “artistic purity.”

After nearly two and a half years of selling poetry in this fashion in Berkeley, I moved to New York City, with the idea of finding a producer for a small play I had written about a man who was trying to kill his conscience. The play never got produced, and I was stuck in New York City and needed to make a living. I noticed that hundreds of vendors dotted the New York City streets, primarily selling hot dogs and chestnuts. I reasoned that there must be room for at least one vendor of poetry. I found out that since I had served in the military, and received an honorable discharge, I was entitled to a vendor’s license to sell on the New York City streets and surrounding boroughs, as long as I obeyed certain rules regarding the locations and times in which I sold. I started out with a card table on which I placed the booklets. Then I graduated to a stand, on top of which I placed a sign which alternately read, “Original Poetry for Sale by Author” or “Fine Poetry for Sale by Author.” Against each side of the stand I leaned a poem of mine that was printed on a poster in large print, which had been published by a poster company in New York.

My stand and I were an unusual sight, and it caught the attention of people. At the exact moment that passers by focused on me and my stand, (New York City streets are awash in foot traffic), or glanced over at us, I politely offered them a booklet of my poems, with the words, “Would you like to look at a copy? There’s no obligation.”  Many people would stop and either read the poem in front of my stand, or take a booklet from me and read a poem or two. As soon as one or two people were standing around my stand, reading my poems, it drew the attention of other people who were curious to see what was going on. It was not uncommon for me to have half a dozen or more people standing around my stand, reading my poetry. I met many interesting people in this way, and had many interesting conversations. During the week, I sold at about fifteen colleges located in New York’s five boroughs. On weekends, I sold in front of the Metropolitan Museum of Art and in Central Park; and on Friday and Saturday nights, I sold on Sixth Ave. in Greenwich Village, which drew a lot of foot traffic, including tourists.

On the back of each booklet, I gave my P.O. Box address and information for ordering booklets of my poetry for one dollar apiece. I received a continual stream of fan mail, averaging about six letters per week. Most of my poems are “philosophical vignettes,” offering a simple, common sense philosophy about the hopes, dreams and struggles of people, and about their concerns, activities and relationships. Most of my poems are written in free verse; however, this sample of my poetry includes rhyme:

Every writer who is worth a flower

will not write for wealth or power.

With his conscience for his guide,

only true thoughts will he scribe.

If his pen has dribbled ink

and not words of flowing think,

he knows it and ceases,

authoring no lies or nonsense.

Many books will come and go

which have only words to show;

it takes a writer worth a flower

to stay a sentence if it’s sour.

have put big, big books in the wrong;

though you only write a little,

people may await your every scribble.

whose pages often reek of non-desire;

while promoted and sold widely, they

Only if his silence is holding back

some beauty that the world does lack

will a writer of merit

call forth his writing talent.

Observe that a writer who is worth a lot

requires no pay for the skill he’s got;

if he inspires us and makes us think,

he feels well paid for his effort and ink.