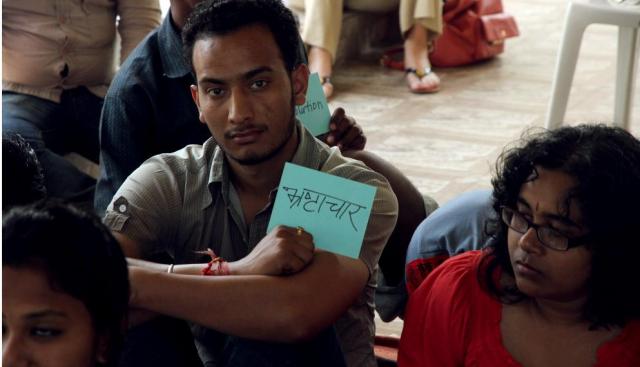 As the fast-unto-death by Indian anti-corruption activist Anna Hazare enters its 4th day, India prepares for a nationwide vigil as a mark of solidarity to the leader, now being called as ‘New age Gandhi’ by many. On Friday, almost every state in India will have at least one candle light vigil in support of Hazare and his demand for the Jan Lokpal Bill which is a stricter version of a draft anti-corruption law.

Organized by various civil society organizations, the vigil is to start form 6 pm onwards. Already all the metros and other big cities including Mumbai, Chennai, Bangalore, Ahmedabad have announced the plans; citizens are to gather at a prominent public place with candles, placards and banners. Those who cannot reach the venue, are asked to light candles at their home and neighborhood

In Chennai, Marina – Asia’s longest beach and venue of the city’s favorite venue for public events – will see hundreds of university students and citizens from all walks of life gathering. Interestingly, Chennai, along with the rest of the state of Tamil Nadu will vote for a new government on 4th May. The election will be fought under the shadow of a multi-million dollar scam in which A Raja, ex-telecom minister and a local resident of Chennai, made huge profit.

The citizen’s war on corruption and their swelling support for Hazare and anti-corruption law can be an indication that the upcoming election will see many upsets. Says Mani Manickem, a Chennai resident and young activist, “In our state, leaders compete against each other in stealing money and making scams. The 2-G scam has brought shame to all Tamil people who always felt proud for being honest and academic. Anna Hazare’s fight has inspired us to give a fitting reply to the government and restore our pride.”

Another significant development will be witnessed in Jammu and Kashmir where signature campaigns and marches are planned on Friday in support of Anna Hazare. For a state that normally takes little interest in political issues not related to Kashmir, this is a unique development.  The march here is being organized by J&K Right to-Information Movement – and similar organizations that are demanding strong anti-corruption legislation at the state. Muzaffar Bhatt, the convenor of J&K Right to-Information Movement says, ‘This (campaign and vigil) is not for me or for you but for all of us. This is the right time to demand accountability and end to corruption in J&K’.

Joining on the vigil on Friday are also smaller cities like Panaji(Goa), Ajmer(Rajasthan) and Patna (Bihar) that are smaller in size, but have ill repute of being very high on the corruption index. Last week, the education minister of Goa was detained by excise officials for violating foreign exchange rules and carrying a large amount of cash outside India. The issue is currently being hotly debated at the  ongoing assembly session. The citizens crusade against corruption is, therefore, very likely to be echoed in different political forums across the state.