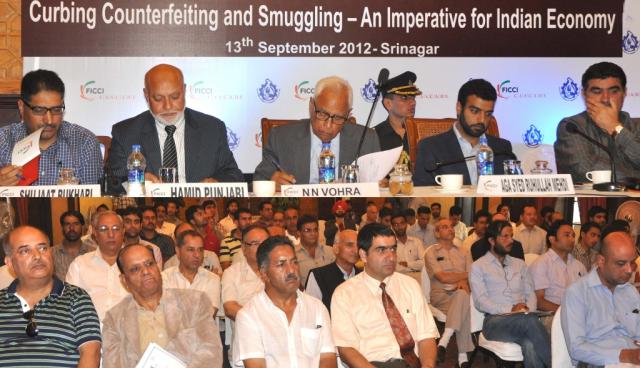 Srinagar, September 13 (Scoop News)-   N. N. Vohra, Governor Jammu and Kashmir, today called for launching a multi-pronged and sustained public campaign to enlarge awareness among the people of J&K about the criminal offences involved in counterfeiting, smuggling and other organized crime which adversely affect the rights and interests of individuals, damage the interests of growers, producers, manufacturers and traders, cause loss of revenue to the public exchequer, and pose a serious threat to the security of the State and the country.

The Governor, as Chief Guest, was inaugurating a Seminar on “Curbing Counterfeiting and Smuggling – An Imperative for Indian Economy”, organized by the Federation of Indian Chamber of Commerce and Industry (FICCI)-CASCADE (Committee Against Smuggling and Counterfeiting Activities Destroying the Economy), here today.

The Governor observed that the huge unlawful funds which accrue from smuggling, fake currency, black money and hawala transactions are utilized by organized crime groups and mafia networks to foster illegal trade in arms and drugs and fund terrorist activities, all of which generate serious security related problems worldwide. He added that is already faced with serious problems of terrorist networks being funded through the circulation of fake Indian currency.

The Governor congratulated the FICCI-CASCADE and the Kashmir Chambers of Commerce for joining hands to deliberate on such an extremely important problem. He observed that the over 12 million tourists and pilgrims who arrive in , and Ladakh regions every year make significant purchases during their visits to the State. And even if a small percentage of the visitors are cheated and sold spurious goods there would be damage to the reputation of the State as the most attractive tourist destination. In this context, he stressed that the producers, manufacturers, traders, shopkeepers and all other stakeholders have to play an important role to ensure that they buy and sell only genuine and not counterfeit goods. He added that, side by side, it is equally important to ensure that all the relevant laws are most strictly enforced against those involved in the manufacture and trade of counterfeit drugs, food items, soft drinks, software, carpets, handicrafts and various other items in violation of Intellectual Property and Trade Mark rights, causing loss of revenue to the exchequer and bringing a bad name to the people and the State. He reiterated that the entire civil society must launch a campaign against spurious drugs and such a movement must be fully supported by the media.

The Governor expressed the hope that the Seminar will culminate with a set of recommendations which would go a long way in curbing counterfeiting, smuggling and other organized crime. He wished successful deliberations to the participants of the Seminar.

Aga Syed Ruhullah Mehdi, Minister for Science and Technology and Information Technology, complimented FICCI for organizing in the State a Seminar on a very relevant subject to enlarge awareness among the people against counterfeiting and smuggling. He observed that the counterfeit products not only cause loss to the State exchequer but the consumers also do not get the genuine products. He emphasized the need for trade, industry, commerce, media fraternity, law enforcing agencies and the society at large joining hands to deal with this issue. He thanked the Governor for inaugurating this Seminar.

Deep Chand, Advisor, FICCI-CASCADE, giving global and the country-specific facts and figures vis-à-vis counterfeiting, said that the magnitude of the problem is very serious. While throwing light on the level of counterfeits floating in the market, he said that has emerged as a leading place for manufacturing counterfeit goods. He put forth several suggestions to deal with this problem, which include bringing down to a reasonable level the prices of branded products. He also spoke about the aims and objects of the FICCI-CASCADE and its future Action Plan.

In his welcome address,  Hamid Punjabi, President, Kashmir Chambers of Commerce, said that this Seminar is of immense importance as it would help in enlarging awareness among all the stakeholders as how to curb the production and use of counterfeit products. He said that handicrafts products have become worst victims of counterfeiting and sought the support of FICCI-CASCADE in this regard.

Ms. Meenu Chandra, Head FICCI-CASCADE presented a Vote of Thanks.

Prominent among those present at the inaugural function were  Justice (Retd) B. A. Kirmani, President, J&K State Consumer Disputes Redressal Commission;  Shujaat Bukhari, journalist; office bearers of FICCI, representatives of trade and industry, participants of the Seminar and media persons.