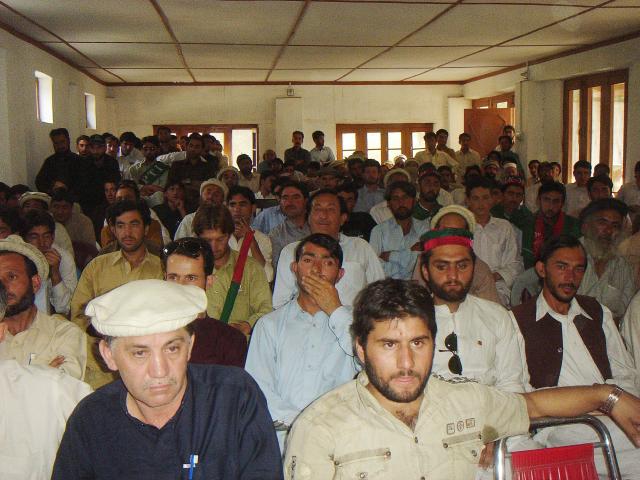 CHITRAL: Residents of Jughoor, Bakarabad and Chamarkun villages in a public meeting under the chair of Bashir Ahmad mechanic criticized an under construction micro hydro power house at Jughor village. They alleged that owner of the power house Maghfirat Shah former district Nazim violated all rules and regulations. They said that this power house is being constructing on the bank of Jughor goal (canal) as a result water of the stream would be contaminated and would not be able to use it for drinking purposes after polluting by power house. Several diseases can outbreak in the area due to drinking of contaminated water because a large number of people using this water for drinking purposes. Besides it irrigation water will be badly disturbed after construction of this power house and cultivable land consisting on hundreds of Acres of these three villages might be barren because its water would be diverted for power house. They also expressed that might he will establish a marble factory in the area after completion of power house which also can cause of polluting the environment. They also alleged that before constructing of any power house a party is bound to get license from NEPRA (National Electric Power Regulation Authority) but Maghfirat Shah has started work without any license issued from NEPRA. Quoting some acts and sections of NEPRA and electric power act they alleged that this power house is illegal and have no justification. They said that before getting a license from NEPRA applicant is bound to pay 7.50 million fee for this purposes but he paid nothing.

Residents of the area has demanded from the concerned authorities to stop working on that disputed power house otherwise they will be come on roads and will kicked a extreme protest against it they added.