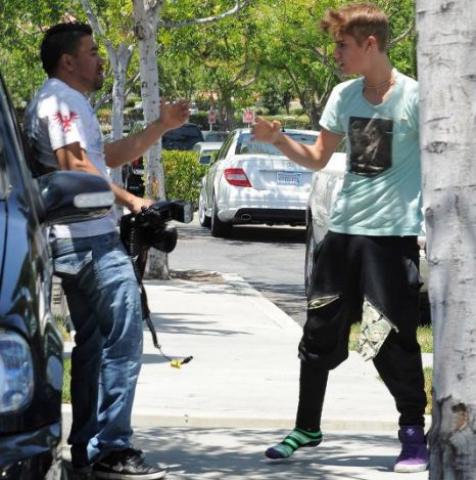 The Los Angeles County Sheriffs Department is investigating a complaint that Justin Bieber roughed up a man at a shopping center in Calabasas, California, on monday.TMZ reported that the friendly guy from the shopping center was a professional celebrity photographer who took pictures of the singer. Bieber was with his girlfriend, Selena Gomez, when the Paparazzo blocked his car.

According to an Eyewitness, Bieber started battering the man who blocked his car and refused to leave. After Bieber had left the scene, a lawyer arrived and told the photographer to call an ambulance and to file a police report.“ Los Angeles County paramedics arrived at the Calabasas Commons with the Fire Department and Police arriving moments later following Justin’s altercation with a paparazzo. Justin’s bodyguard arrived while the photographer received medical attention for an apparent strike to the face,”commented an Eyewitness.

Justin Bieber trained with Mike Tyson just days before the incident that lead to an LASD investigation. A big bag of bad timing!