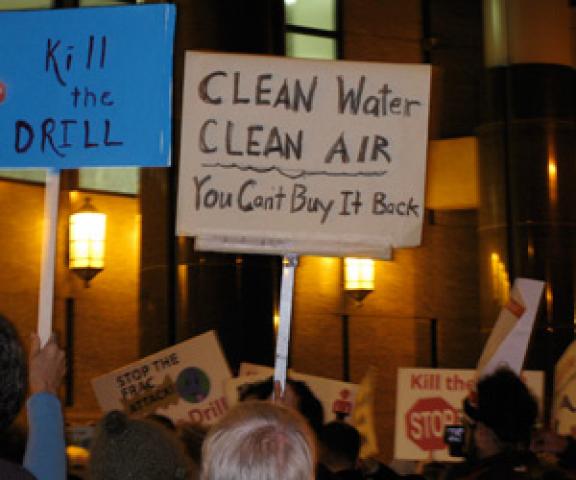 It didn’t take long for a New York City public hearing on natural gas drilling to descend into near chaos.

Just seconds after the first speaker took the microphone at the Department of Environmental Conservation’s hearing, a man in a suit and tie jumped onto the stage at Stuyvesant High School, where the meeting was held.

"We want a statewide ban!" he shouted. "The gas drilling is dangerous!" As a pair of officers escorted the shouter off the stage, the crowd — which spilled out of the large auditorium — stood and screamed, brandishing anti-drilling signs.

The group that gathered Tuesday night had no intention of reconciling those points of view.

The first speakers were public officials (or their stand-ins), who read prepared statements echoing each others’ calls for a ban of drilling in New York City’s upstate watershed, which supplies drinking water for 9 million city residents. Chesapeake Energy Corp., which says it is the only company that owns leases in the watershed, has pledged not to drill [2] there. But the officials who spoke — including Manhattan Borough President Scott Stringer, who has led the cause locally — were pushing for the state to take that pledge further by banning drilling in the watershed.

"A press release is not a contract," Stringer said, referring to Chesapeake’s announcement of Oct. 28. "A company’s pledge is not legally binding."

In his testimony at the hearing, Scott Rotruck, Chesapeake’s vice president of corporate development, was applauded when he repeated his company’s promise. Later in his statement, however, many of his points — including the claim that the "winners environmentally and financially will include the residents of New York City" — were met with boos.

Other industry representatives, including Brad Gill of the Independent Oil and Gas Association of New York state, had planned to make comments but left without doing so.

The DEC recently extended the public comment period on the 800-plus page report from 60 days to 90, and will hold two more public hearings before the period ends Dec. 31. Comments can also be submitted by mail or online.

Kate Sinding, a senior attorney with the Natural Resources Defense Council, used her five minutes at the microphone to list problems with the review. She said it fails to prohibit drilling in special ecological areas and fails to consider the cumulative impacts of drilling. Sinding also complained that the review doesn’t require any legally defensible regulations.

Rather than imposing regulations, Sinding said, "DEC is proposing instead to ‘implement’ the mitigations through form filings and permit conditions."

"Only through legally enforceable regulations can the public be assured that gas companies are being held to the new requirements being proposed by the DEC," she said over a crescendo of applause.

The next hearing is scheduled for Thursday evening in Chenango Bridge, N.Y.