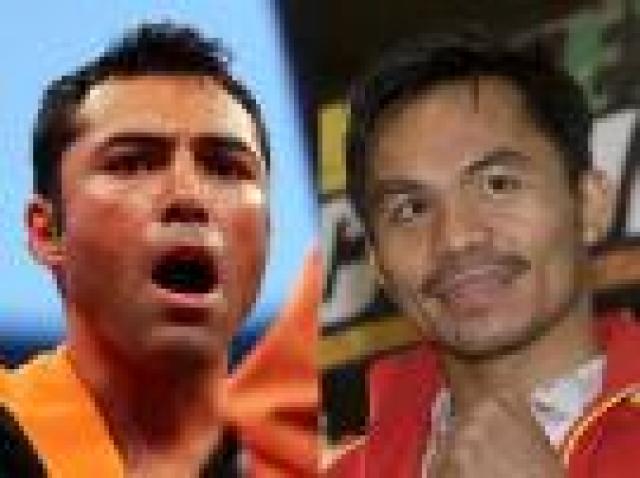 Oscar de la Hoya’s almost sure victory against popular pound for pound boxer Manny Pacquiao on account of his physical superiority appears to be uncertain at this time. What appears to be a well paved road to victory is now bumpy with lots of roadblocks along the way.

Latest news from the camp of Oscar de la Hoya indicate that he is struggling with his weight reduction program. He has to weigh no more than 147 pounds on fight night of December 6, 2008. This is the first time in six years that de la Hoya will fight at 147 pounds.

An eyewitness account of de la Hoya at his high altitude Big Bear training camp in the mountains of Los Angeles confirmed wild rumors that he is far from his usual top fighting form less than 8 days before fight night. Reports say that Oscar looks thin and skinny.

Another big blow to his physical conditioning efforts is his recurring problem of his rotator cuff which brings pain to his left shoulder. The rotor cuff injury on his left shoulder is a major cause of alarm for his fitness handlers.

It is known that de la Hoya has had a slight tear of the rotator cuff and he struggled with it during the past few years. He made mentioned of the injury during his last fight with Ricardo Mayorga in 2006.

Manny Pacquiao’s favorite trainer, Freddie Roach said that de la Hoya’s sparring partner, Victor Ruiz has given Oscar enough beating in one of their sparring sessions. Oscar opted not to engage Ruiz in another sparring session as scheduled. Apparently Oscar is having difficulty with his left shoulder injury. This was confirmed by HBO television footage taken during the open media workout recently.

Pacquiao’s celebrity promoter Bob Arum, told that de la Hoya has been training hard for this fight, said that while de la Hoya has always trains hard “but the reports that we have is that he has not looked great in training” He noted further, “Pacquiao will wear Oscar down, beat him and see his face cut and take him out in one of the later rounds”.

Oscar de la Hoya squares it off with Manny Pacquiao at the MGM Grand in Las Vegas, Nevada on December 6, 2008. de la Hoya has been popularly regarded as the eventual winner in this boxing match on account of his superiority in reach, height, weight and built. Many boxing fans across the globe say that this fight is a mismatch, owing to the physical superiority of Oscar de la Hoya over the much smaller Manny Pacquiao. Some say that the fight is all about money.