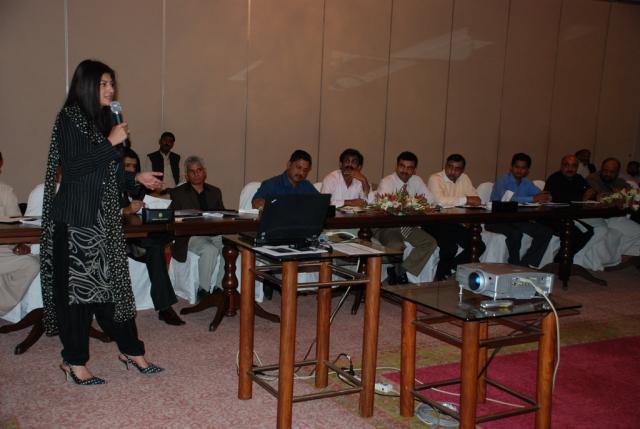 is suffering millions of dollars losses due to day by day raising piracy rate which is touching about 84 percent these days.

Over two-thirds of manufacturers feel that the threat to their intellectual property (IP) has grown, resulting in lost sales, lost market share and lower margins around the world including .

In music CDs and DVDs the Motion Pictures and the software industry are suffering billion globally in losses annually and also in due to piracy. Various studies have found reasonable evidence that most of the piracy is controlled by organized criminals who are also involved in other illegal activities, Paktribune.com reported.

To address this issue, a full day workshop for the media persons focused on "COUNTERING SOFTWARE PIRACY AS A SOCIAL & ECONOMIC ISSUE” was jointly organized in by the Microsoft in . A big number of the active journalists and writers attended the workshop.

The main objective of the interactive workshop for journalists was to raise awareness on the role of media in the fight against software piracy, copyright infringement and to highlight the value of genuine software to consumers, businesses and the national economy. Microsoft took this initiative keeping in mind the hazards and threats posed by software piracy.

In the inaugural session, smart lady Fariha Shah, Marketing Manager, Microsoft told journalists about the theme of the piracy going to be discussed in the workshop. She derived some examples of piracy from the real life and discussed the issue.

Speakers at the workshop highlighted the value of sharing experience among journalists for protecting intellectual property rights. They noted that protection would encourage investment and facilitate the economies of the country.

Microsoft Citizenship Manager Pakistan Afzal Mirza said that international firms want to make huge investments in the IT sector in but they want surety against piracy.

Genuine Software Manager Salman Siddiqui told the journalist that piracy is a global problem and is causing $40 billion loss annually. He said that pirated software is being widely used in and the government and private organisations are in the forefront in this regard.

“If use of pirated software is reduced by 10 per cent, it could add $163 million to the gross domestic produce and $23 million could be added to the national exchequer besides foreign firms could make huge investments. According to a survey of the Business Software Alliance, Pakistan’s IT sector was at 62nd position in global ranking which places it behind other comparable economies like India, Bangladesh, Nepal, etc.’ he added.

He further says that Microsoft aims to deploy genuine software technologies in and partner with LEA to abolish the presence of pirated software in and enable it to evolve as an IT exporting country.

She said that minimal punishment is awarded by courts while pirates are not being punished because of lacunae in the law. The FIA official said that the compact disk is not the only medium of software piracy, but pirated software are also available through the Internet.

Speakers informed that Bill Gates met with Pervez Musharaf and former Prime Minister Shaukat Aziz in for this issue but he could not get any encouraging behavior.

He said that the fight against piracy is a shared fight and we need to devise strategies where private enterprise collaborates with governmental agencies to effectively eradicate the issue of counterfeit. It is also imperative that media through its wide reach create mass awareness in the consumers who are hoodwinked into buying spurious and sub-standard products.”

“In recent months FIA has taken a number of measures to control counterfeit market in Pakistan and due to these efforts FIA got appreciation from a number of international stakeholders’ he added.

In order to create greater awareness, Microsoft partnered with Anti-Counterfeit and Infringement Forum (ACIF) and Federal Investigation Agency (FIA) to highlight the issue of counterfeit trade and piracy and how it affects the economy and the common-man alike.

The Trade Marks Registry, Copyright Office and the Patent Office are also part of the organization dedicated to preparing and implementing IPR laws. It would be the responsible for strengthening of intellectual property rights and their development, upgrading, and infrastructure through designated law-enforcement agencies.

In spite of all former actions against criminals, the government could not obtain required results. Even today, a CD or book that retails for $4-6 in the international market may openly be purchased for less than half a dollar in . Microsoft is presenting its one software at very cheap rates for 2800 rupees ($34.5) in the market but on the other hand you may buy the same pirated software from any pavement vendor for Rs30($0.37).

But if we generally, is not the only country facing a piracy problem even United sate of is suffering it with the piracy rate of 20 percent and 62 Percent. The problem can be controlled by effective law enforcement measures and raising people’s awareness. Software efforts along with ‘s efforts in fighting piracy in the country up to now are appreciable.