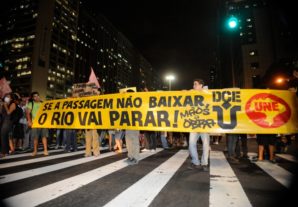 Brazilian citizens have taken to the streets in the major cities of Sao Paulo, Rio de Janeiro, and the capital Brasilia, as well as across the country as a whole. Ostensibly protesting high fares for public transportation, Brazilians are also demonstrating against widespread political corruption, an inadequate healthcare system, and what many see as a squandering of R$30 Billion ($1.38 Billion USD) on soccer stadiums for the 2014 World Cup, instead of using those fund for social services.

Monday evening saw a crackdown of the peaceful protests in the city fo Sao Paulo by police in full riot gear. Videos posted on social media websites showed stark evidence of violent police crackdowns. Police officers are at first seen forming barriers with riot shields to block marchers. Soon, the police begin firing tear gas canisters and rubber bullets at the protesters, who shout to the police in Portugese “without violence,” and “shame.” Some videos show police officers firing tear gas canisters and rubber bullets at a group of reporters, who had clearly identified themselves as the press.

Protests began in several cities late last year and early this year over projected fare-hikes for buses and the metro. As politicians ignored the protests and implemented the fare-hikes, the protests grew and cropped up in more cities. The issues go deeper than public transportation, however. The fare-hikes, according to protestors, are symptomatic of a corrupt political system, perceived as wasteful and indifferent to the needs of the people.

The protests come only a year before Brazil is set to host the FIFA World Cup in 2014, and the Brazilian government’s handling of the hosting duties has caused ire amongst Brazilian citizens, as well. Development for the World Cup has cost the Brazilian government 30 Billion Brazilian Reals ($1.38 Billion), over twice as much as the previous two World Cup’s combined. Though the government touts the economic boon that usually comes with hosting a huge international event, like the World Cup, protestors complain of rampant waste and corruption, as well as pointing out the more direct and lasting benefits of investing in the currently inadequate healthcare and education systems.

Municipal governments and the state government are bracing for continued protests today and this evening. Though the immediate reason for the protests may be bus fares, they clearly show much deeper frustration in the Brazilian populace. Will the government make a substantial response to the protestors’ complaints, or will cities continue to try to violently repress the movement?