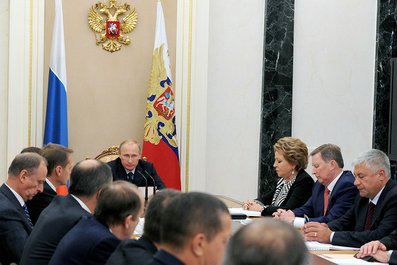 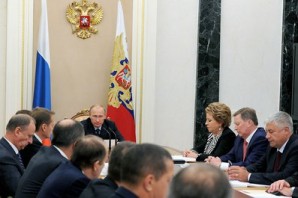 “We have a comprehensive strategic document in place – the Information Security Doctrine. Starting last year, we began setting up a state system to detect, prevent and liquidate the consequences of computer attacks against Russia’s information resources. We are establishing modern, protected communication networks and systems for our defense and security needs and for the law enforcement agencies’ effective operation”, said Putin to Security Council members on October 1, 2014.

Measures to improve protection of Russia’s communications networks and information resources and guarantee stable operation of the Russian segment of the internet were the main subjects of discussion.

Once again, with everyone present, I would like to congratulate Ms Matviyenko

“> on her election as speaker of the upper house of parliament, the Federation Council. I wish you success once again on behalf of everyone present.

This is a priority area in our efforts to ensure national security today. Reliable operation of our information resources and control and communications systems is vitally important for our national defense capability, a steadily growing economy and social sector, and for protecting our sovereignty in the broadest sense of the term.

The modern era is justifiably called the information age. New technologies and global communications networks now cover practically every area of human activity and society. Before our very eyes, they are changing peoples’ quality of life and helping to globalize the economy and develop the humanitarian space.

But at the same time, we need to take into account the risks and threats that exist in the information sphere. We see that some countries are attempting to use their dominance in the global information space to pursue not only economic but also military and political objectives. They make active use of information systems as an instrument of so-called ‘soft power’ to achieve their goals.

Our agencies responsible for this area have noted a steady rise in the number of computer attacks against Russian information resources. Over the last six months, the number of attacks has increased very rapidly, to an extent simply incomparable to what it was last year. At the same time, the methods, resources and tactics used to carry out these attacks are improving and their frequency is directly linked to the current international situation.

We have already taken some important steps to ensure Russia’s information security over these last years. We have a comprehensive strategic document in place – the Information Security Doctrine. Starting last year, we began setting up a state system to detect, prevent and liquidate the consequences of computer attacks against Russia’s information resources. We are establishing modern, protected communication networks and systems for our defense and security needs and for the law enforcement agencies’ effective operation.

We are working actively together with our partners on guaranteeing international information security, including through the United Nations, the BRICSis an international association of fife countries: Brazil, Russia, India, China, and South Africa.

Initially, the BRIC Group was formed by four of the world’s fastest-growing economies – Brazil, Russia, India, and China. In December 2010 South Africa joined the BRIC Group.

“>. At the last BRICS summit, for example, our countries’ leaders condemned the mass electronic surveillance and personal data collection that has been practised by particular countries’ security services. We consider this a direct violation of national sovereignty and human rights, especially the right to inviolability of private life.

At the same time, we see the clear need today to draft and implement a package of additional measures to protect information security.

First, we need to improve the protection level of Russia’s communications networks and information resources, above all the networks used by our government bodies. We must prevent any unlawful interference in their work and also prevent leaks of confidential and personal information.

Second, we need to ensure stable operation and security of the Russian segment of the internet. Let me make it clear here that we have no plans to restrict internet access or put the internet under total control, put in the state’s hands or restrict the lawful interests and possibilities of people, public organizations, and business in the information sphere.

Media freedom and people’s right to receive and distribute information are basic principles of any democratic government and any democratic society and country. These are principles that must be respected at all times, and we will do precisely this. Let me say again, there will be no unjustified restrictions, all the more so of a total nature. Not only will there be no such thing but we are not even considering it.

We do have a duty though to protect our citizens from the kind of risks that I just mentioned, and we can do this too by making use of methods practiced in many countries around the world.

We cannot just close our eyes to the fact that some sites propagandise terrorism and extremism, xenophobia and religious hatred, or that in the global internet one can also find child pornography and detailed information on how to manufacture drugs or commit suicide.

Countries all around the world are fighting against these kinds of materials, fighting actively. Those disseminating such materials are punished and in some cases even have criminal charges brought against them. We will act in this same way, consistently and strictly in accordance with the law, to close such sites. No one should be in any doubt about this.

Of course we also need to be able to respond swiftly to any attempts to disrupt the Russian segment of the internet’s normal functioning. In July this year, we held inter-agency training exercises on preventing such attempts. Based on their results, the Government is drafting the needed measures that will help us to guarantee our sovereignty in this area.

A third area for work is to develop home-grown technology, equipment and information products. We need to take steps at the same time to encourage government bodies and Russian companies to use these products. Our agencies have been set objectives in this area. I would like to hear the Security Council members’ opinions on priority measures in this area today.

Finally, we need to expand our cooperation with global and regional organizations on guaranteeing international informational security. I think that the United Nations and its relevant groups and specialised agencies should act as one of the platforms for assessing risks and drawing up joint measures on information security and analysing the legal consequences of such measures.

Filed under: News, World
Share Tweet Pin G Plus Email
previous article: Russia experiencing a steady rise in computer attacks over the last six months
next article: “We need to ensure stable operation and security of the Russian segment of the internet”, warns Putin